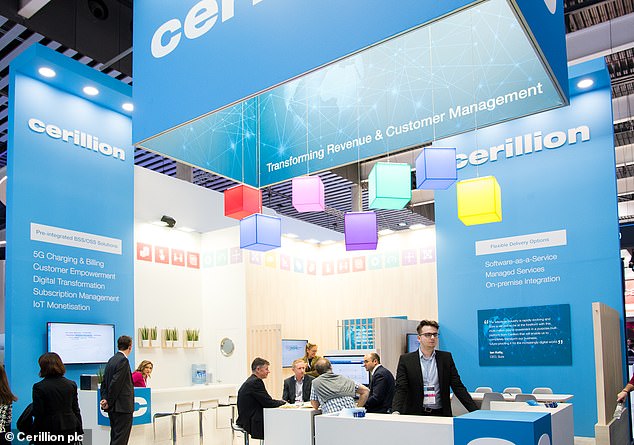 Cerillion shares soared today after the group told investors that annual earnings would significantly surpass prior anticipations on the back of sustained strong trading.

The software provider now believes its adjusted pre-tax profits for the 2022 financial year will be ‘materially ahead’ of market forecasts of £10.1million, while revenues will be just ‘marginally ahead’ of expectations.

Upgrade: Software provider Cerillion now believes its adjusted pre-tax profits for the 2022 financial year will be ‘materially ahead’ of market forecasts of £10.1million

Cerillion gained its largest contract ever during the fourth quarter, a decade-long deal with an unnamed telecommunications customer worth an estimated £15million.

Cerillion shares leapt by 8.2 per cent to £11.25 on Monday, making them one of the top 25 risers on the junior AIM market.

Over the past 12 months, their value has climbed by 28.4 per cent but soared more than sixteenfold since listing on the London Stock Exchange six years ago at a modest placing price of 76p.

‘The pipeline of new business opportunities, from both existing and prospective new customers, remains buoyant, and the company is well-positioned as it enters the new financial year,’ the London-based firm remarked.

Brokers Liberum and Singer Capital Markets have both lifted their target prices and upheld their buy recommendations for Cerillion.

Founded in 1999 as a spin-off of the defunct IT consultancy Logica, Cerillion offers billing, charging and customer management systems software to companies across a variety of sectors and dozens of countries.

In the six months to 31 March, the group reported revenue surged by 26 per cent year-on-year to £16.1million, while its statutory pre-tax earnings rocketed by 72 per cent to £5.7million.

Even though the value of major new orders fell significantly, its new customer sales pipeline increased by nearly a third to £172million.

When the half-year results were released, Louis Hall, the firm’s founder and chief executive, said: ‘We see excellent opportunities for continuing growth, and the new customer sales pipeline has grown significantly.

‘Given the company’s progress and its strong financial and operational position, we continue to view prospects very positively.’