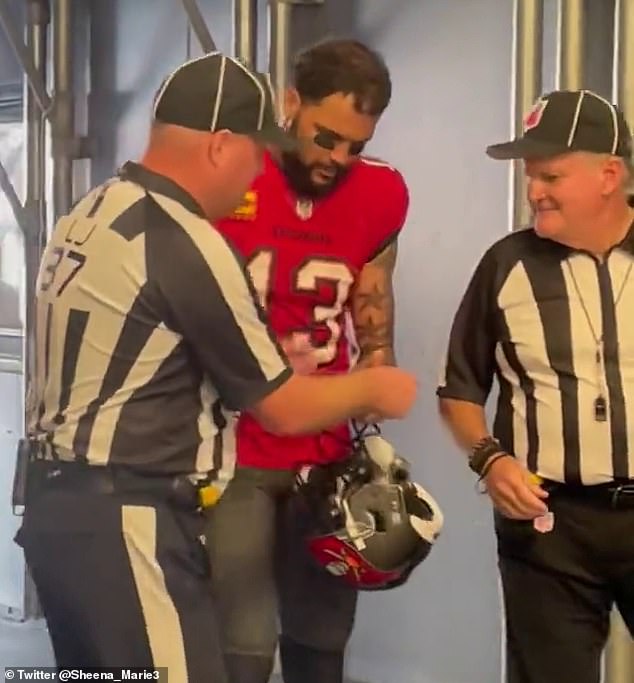 After an investigation, the NFL has determined that two referees who called last Sunday’s game between the Buccaneers and Panthers were not seeking Tampa Bay WR Mike Evans’ autograph.

As DailyMail.com reported yesterday, the league launched a review of the events after video showed officials Jeff Lamberth and Tripp Sutter running up to Evans with a pen and piece of paper for him to sign.

A statement from the NFL said, ‘After speaking with the individuals involved, we have confirmed that the postgame interaction between Jeff Lamberth, Tripp Sutter, and Mike Evans did not involve a request by the game officials for an autograph.

‘Both Lamberth and Sutter have been reminded of the importance of avoiding even the appearance of impropriety when interacting with players, coaches, and club staff on gameday – including during the pregame and postgame time periods.’

Further reporting from NFL Network’s Tom Pelissero says, that Evans and Lamberth, ‘both went to Texas A&M, and Lamberth was getting Evans’ phone number to pass it along to a golf pro to give Evans lessons, per sources. Lamberth didn’t have paper, so he borrowed it from another official.’

According to the NFL-NFLRA collective bargaining agreement, officials are prohibited from asking ‘players, coaches or any other team personnel for autographs or memorabilia.’

It isn’t clear if there are any rules that lay out punishment for officials who do go seeking signatures.

It’s possible that the referees were asking Evans – a team captain for Tampa Bay – to sign an official document such as a score sheet or game notes.

The Buccaneers lost the game to the Panthers 21-3, which came as a shock after they fell to the Pittsburgh Steelers the week prior.

Evans dropped a wide-open 64-yard touchdown pass on the third play of the game.

‘No one play is the sole reason you lose, but that was definitely the biggest reason,’ Evans said postgame.

‘I seen the life go out of us. It took me a while to get back playing. We’re taught to play the next play, but it was tough — wide open, one of the best in the game — I’ve got to catch it.’

Evans was referring to star quarterback Tom Brady, who issued another rallying cry to his team following the disappointing loss on Sunday.

The Bucs fell below .500 as the Panthers sealed just their second win of the season.