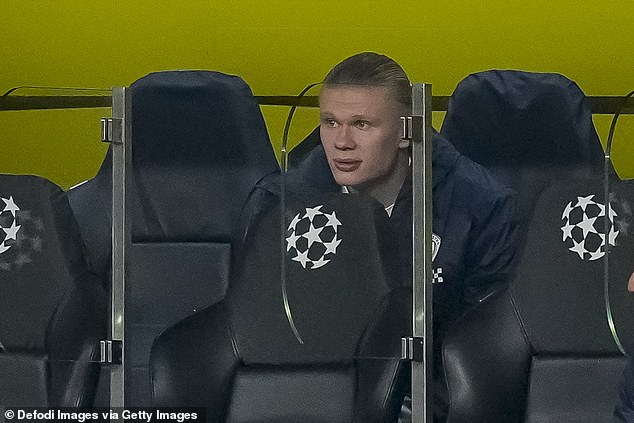 Pep Guardiola insists he only replaced Erling Haaland at half-time in Manchester City’s goalless Champions League draw at Borussia Dortmund due to the star striker being ill.

On his return to his former club, where he was given a warm welcome, the Norway international struggled to make an impact during the first 45 minutes and he was surprisingly replaced at the break to make way for Bernardo Silva.

Haaland has started life at City on fire after leaving the German side for the Etihad Stadium in the summer, netting an astonishing 22 goals in just 15 games this season.

But he looked off colour on his return to Signal Iduna Park after carrying little threat during an insipid first half.

The City striker then watched the rest of the game from the substitutes bench with fellow first-team stars including Jack Grealish and Kevin De Bruyne before stepping onto the field at full-time and greeting supporters.

There was little jeopardy in the game for City who had already qualified for the last-16 of the Champions League, before they went on to secure a 0-0 draw that confirmed them as group winners.

Manager Guardiola though insists Haaland’s struggles were due to him carrying a slight illness before the game, along with full-back Joao Cancelo, who was also substituted at the beak after a poor first half where he was booked and struggled to contain Dortmund star Karim Adeyemi.

‘Erling did not feel good,’ Guardiola told BT Sport. ‘[He had] a little bit of a fever before the game. Joao as well. He had a knock in his feet and I saw them tire and always in that period we struggle a lot.

City improved in the second half in Haaland’s absence taking a large control of possession and even winning a penalty kick after former Liverpool midfielder Emre Can brought down Riyad Mahrez.

Although Mahrez dusted himself down to take the spot-kick, his powerfully struck effort to the left of goal was far too central and allowed Dortmund keeper Gregor Kobel to parry clear.

Rio Ferdinand claimed he believed Guardiola was telling the truth rather than protecting his striker from a poor performance.

‘I believe him [Guardiola], I believe him,’ Ferdinand told BT Sport. ‘He’s given him 45 minutes rest. In terms of his team, they’ll be disappointment in the way they’ve played and done things in the final third but at the end of the day, they’ve done what they came here to do.’

Rio Ferdinand insisted that despite a below par display, City will be happy to have got the point

Fellow pundit Owen Hargreaves also defended Guardiola’s choice to start the striker, claiming players can still be desperate to play, despite not feeling 100 per cent fit.

‘Players sometimes feel under the weather but say “boss, play me”,’ he added. ‘He’s going home. We’ve got to believe him haven’t we?’

City still left Signal Iduna Park with the point they needed to ensure top spot and book a last-16 place as a seeded team where they will likely avoid many of their rivals to win Europe’s top club prize.