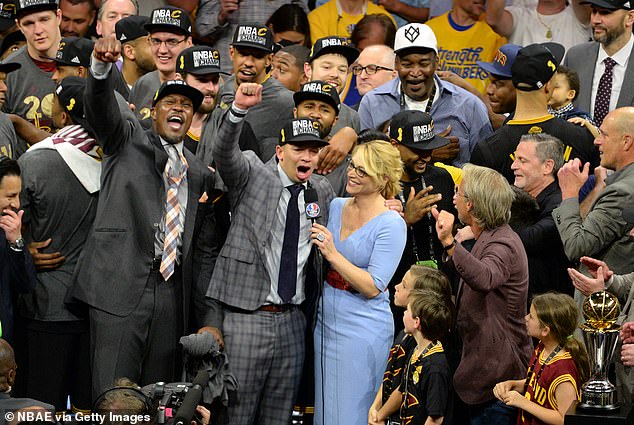 Cleveland historically came back from a 3-1 deficit to win the 2016 NBA Finals against the 73-9 Golden State Warriors in one of the greatest postseason series’ in history.

After being blown out in Game 1 and 2, the Cavaliers lost the fourth game of the Finals at home 108-97, meaning Cleveland needed to win three straight to take the series.

They had to win in Game 5 at Golden State to have any hope, which they did 112-97, behind 41 points from Kyrie Irving and LeBron James.

‘I said, “whoever don’t believe we can win, don’t get on the plane come tomorrow.” And I really believed that,’ Lue said of the day prior to Game 5, via Old Man and the Three.

Following the victory, Cleveland still need a herculean effort to win the succeeding two games, so, Lue had a trick up his sleeve. Not even owner Dan Gilbert or then-GM David Griffin were exempt.

‘They said “what you gone do with this money?” So, I wrapped it up…and I put it in the ceiling and said we’re coming back for game seven and [to] get our money. We go home, we win big in game six, Steph gets ejected.’

Curry did indeed get ejected as Cleveland stomped the Warriors 115-101 behind another 41-point game from King James.

‘So, I go into the ceiling to get the money, and first thing ‘Bron asked me “hey, man, where’s that money?” I said “I don’t know, it disappeared!”‘

‘But I kept for myself’, Lue said laughingly. ‘Just think about that – we win a championship and Bron asked “where the money’s at, that’s hidden in the ceiling!

‘He doesn’t miss anything. But I kept it, so now you know Bron!’

Lue and the Cavaliers defeated Golden State 93-89 in that famous Game 7 behind a late Kyrie Irving three-pointer.

The former Lakers player stayed with the Cavs until October 2018 when he was fired after an 0-6 start to the season.

Soon after, he was named an assistant to Doc Rivers’ LA Clippers ahead of the 19-20 season before taking the top job on October 20, 2020.

Lue and the Clippers have started the new NBA season shakily and hold a 2-2 record.

Lue is now the coach of the Los Angeles Clippers after being fired by Cleveland in Oct. 2018