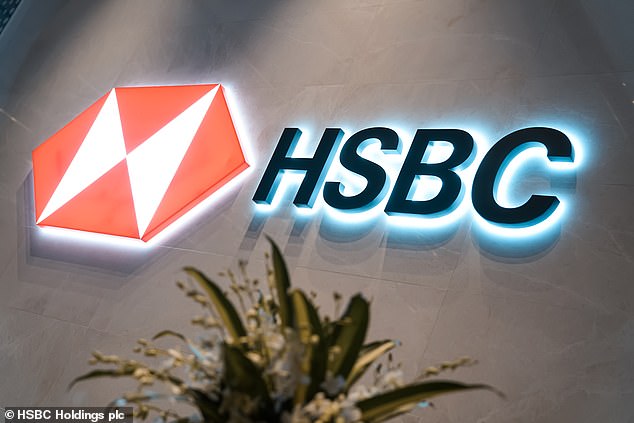 HSBC’s largest investor has called on the banking giant to slash costs and quit certain non-Asian territories in order to boost returns and long-term value.

Ping An Insurance, a Chinese financial services conglomerate, also suggested the FTSE 100 group spin off its division in Asia, where it derives the majority of its profits, from the Western operations.

The Shenzhen-based firm, which owns a stake of more than 8 per cent in HSBC, has been pushing the bank to make major structural reforms for some time, in the belief it has underperformed rivals.

Pressure: Ping An wants HSBC to pursue ‘much more aggressive’ cost-cutting measures, including reductions in staff numbers and IT expenses, as well as on its global headquarters

The firm said that HSBC Group was in the bottom quartile in 45 per cent of key operating metrics relative to equivalent peers, while in Asia, it was either last or second-last in over half of metrics in 2021.

Ping An also noted that the bank’s return on tangible equity had averaged just 7 per cent over the previous five years, which it said was ‘far too low in absolute terms and also low relative to peers that also suffered from a low interest rate environment.’

And though the group conceded recent interest rate hikes had given HSBC a boost, it claimed the benefits this conferred were ‘temporary and unsustainable.’

It wants HSBC to pursue ‘much more aggressive’ cost-cutting measures, including reductions in staff numbers and IT expenses, as well as on its global headquarters.

Ping An insisted this was the ‘most important, urgent and absolutely needed action for HSBC to improve its business performance…particularly amid slowing growth in the global financial industry.’

Alongside this, the company believes HSBC needs to accelerate its ‘Pivot to Asia,’ claiming it has seen little concrete impact of the strategy, and consider a possible separation of the Asian business.

Though it has been widely reported since at least February that Ping An has been pushing for a demerger of HSBC’s operations, it has not publicly commented on the proposal until Friday.

Debate over this have come at a time of rising tensions between the UK and China, and controversy surrounding HSBC’s reliance on the Chinese market, particularly following protests in Hong Kong over the region’s national security law.

HSBC and its chief executive Noel Quinn have consistently hit back at proposals for the company to be spun off, claiming it would cost too much, be very complicated and potentially damage its long-term credit rating.

No other institutional shareholders have publicly sided with Ping An, while many analysts have dismissed the idea, pointing to the harm it could do to the bank’s finances by weakening its link between east and west.

Ping An said: ‘We will support any initiatives, including a spin-off, that are conducive to improve HSBC’s performance and value; we will consider any suggestions that will help HSBC improve its development and operation strategy.’

HSBC Holdings shares closed trading 5.8 per cent to £4.90 on Friday, making it one of the ten highest risers on the FTSE 100 Index.