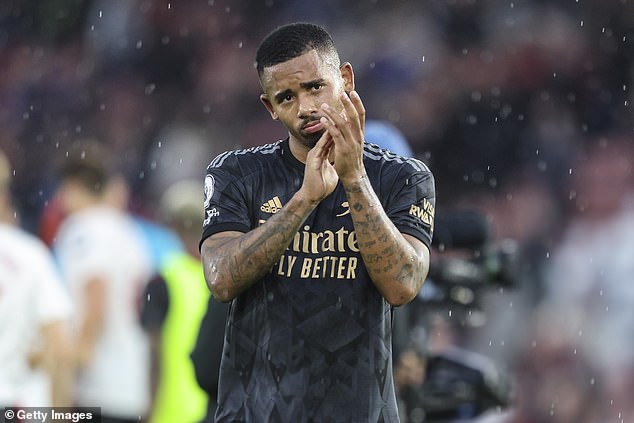 The former Manchester United defender has been vocal in his glowing assessment of Arsenal’s transformation from falling short in their quest for Champions League football last season to current top-flight leaders.

Arsenal re-established their two-point lead over closest challengers Manchester City with a 1-0 victory over cross-city rivals Chelsea in the north west London derby on Sunday. A landmark win for both supporters and players in Arsenal’s quest for a first league title since 2003.

Gabriel Magalhaes claimed the only goal of the game as he reacted first to a goalmouth scramble, but the efforts of Brazilian striker Jesus and central defender Saliba didn’t go unnoticed by Ferdinand.

Speaking on his Vibe with Five YouTube channel, Ferdinand highlighted the duo as Arsenal’s most important players.

‘(Arsenal’s) most important player is Gabriel Jesus or William Saliba. If those players come out the team, the drop-off from that level is massive.

‘You could play Granit Xhaka in Thomas Partey’s position and get through a couple of games, but you won’t get the same output from someone who comes in for Jesus or Saliba.

Jesus has starred since completing his £45million summer move to the Emirates from Man City off the back of lifting his fourth Premier League title in Manchester, scoring five goals and registering five assists in the league.

While for a long time Saliba was an outcast under Arteta, being sent on loan three times before being re-called to kick-start his Gunners career three years after signing for the club.

However despite recording successive Stamford Bridge victories over their closest rivals for the first time since 2004, Ferdinand refused to join overenthusiastic Arsenal supporters in celebrating as he claimed Chelsea fielded a severely weakened side.

‘What I would say is I agree the control without the ball against Chelsea was next level. Unreal.

‘It shows you the coaching and hard work that has gone in under the manager. That was a patched up Chelsea team, they are missing Reece James, Ben Chillwell, Kalidou Koulibaly, Wesley Fofana, Ngolo Kante, there is six players that more or less start in that team.

‘I was so impressed with how Arsenal played but let’s have a little reality check. Arsenal are a serious team now but it wasn’t even their (Chelsea’s) first-team.