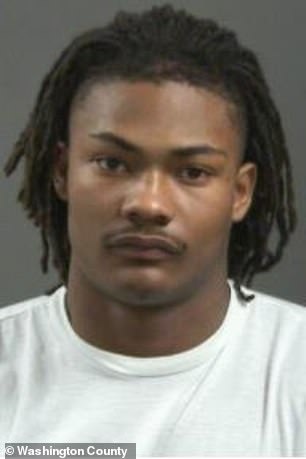 Two Arkansas football players are arrested for disorderly conduct after allegedly being in altercation with cops: Team to decide their status after more information

Two football players from the University of Arkansas have been arrested after allegedly being involved in an altercation with cops.

Anthony Brown, 19 and Myles Slusher, 20 have been charged with disorderly conduct, according to Washington County detainee information.

The alleged incident took place at 2 a.m. Sunday less than a mile from the college campus, according to Fayetteville Police Department.

Brown was involved in an altercation with a police officer when he was asked to move off the street.

‘I instructed Brown to get out of the street and he stepped onto the sidewalk, he complied at first,’ an FPD’s officer’s report states.

On seeing Brown again shortly after he was ‘intentionally’ standing in the road, the report continued.

‘I walked to Brown and grabbed his sleeve of his right arm. I walked with Brown to the sideway,’ the report states.

The teenager then ‘engaged in fighting behavior’ and had to be taken to the ground and handcuffed.

The report continues that Slusher tried to pull the arresting cop off Brown. The pair were arrested and taken to Washington County Detention Center.

They were released at around 9 a.m. Sunday morning with a court date set for next month.

The incident occurred after the Arkansas Razorbacks lost 21-19 to the Liberty Flames in NCAA college football game on Saturday.

‘We are in the process of gathering information from the proper authorities,’ a statement by Razorbacks head coach Sam Pittman said.

‘Once we have that information, we will determine their status with our team.’

Johnathan Bennett threw a career-high three touchdown passes and Liberty’s defense came up with a key stop late as the Flames posted their first-ever win over a Southeastern Conference opponent.