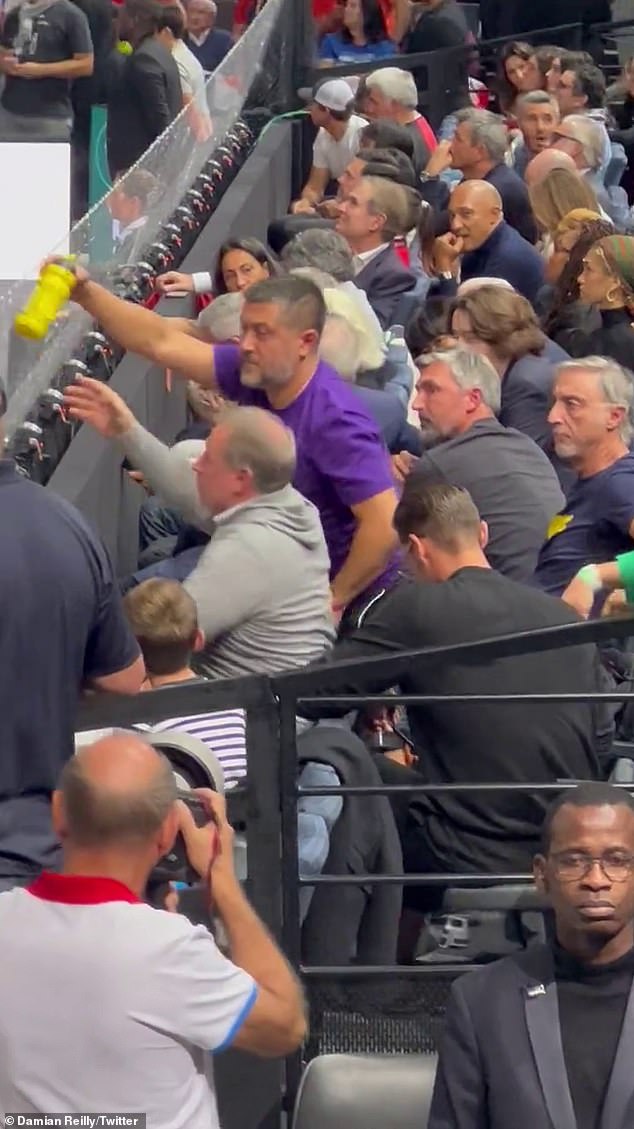 ‘Apparently trying to be private makes you dodgy nowadays’: Novak Djokovic’s wife Jelena insists there’s nothing suspicious about his ‘magic potion’ in the wake of a viral video which showed his physio mixing a drink during final of Paris Masters

During the Paris Masters semi-finals, the Serb’s support team were captured on video furtively mixing drinks up and having bottles taken to him on court at changeovers. They then shielded what they were doing after noticing the filming.

During Wimbledon he could be seen inhaling powder from a bottle, which he called a ‘magic potion’.

Novak Djokovic suffered a shock defeat by Danish teenager Holger Rune in the Paris Masters final on Sunday night, but there’s been a video of his physiotherapist mixing (pictured handing the drink to a ball girl) a drink during his semi-final clash that’s really got fans talking

While Djokovic (pictured) was on court against Rune, a video from his semi-final match against Stefanos Tsitsipas was going viral on Twitter that showed his physiotherapist, Ulises Badio, preparing a mystery drink for the Serbian

But Jelena Djokovic denied any wrong-doing was going on. ‘I don’t see anything dodgy,’ she said. ‘In fact, I see people trying to be private about their business in a world where everyone feels they have every right to point a camera at you.

‘Apparently, trying to be private makes you dodgy nowadays.’

In Glasgow, Great Britain face an early elimination from the Billie Jean King Cup after losing their first group match to Kazakhstan.

With Emma Raducanu absent, Katie Boulter and Harriet Dart lost. And GB could now go out as soon as tonight if Kazakhstan beat Spain today in their group.

Boulter said the expected move of Wimbledon to allow coloured underwear will be well received. ‘I do think it helps,’ she said.