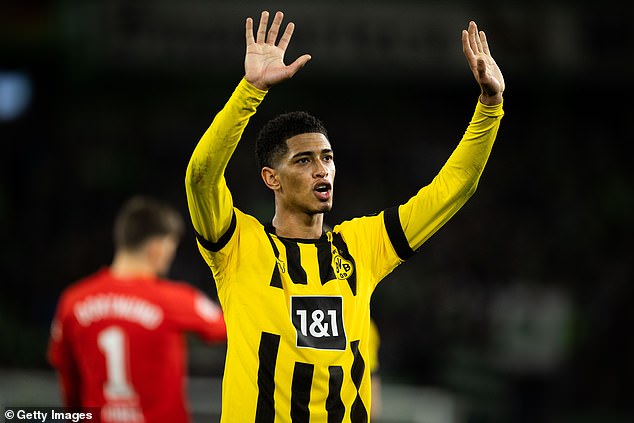 There is a growing belief, according to those with knowledge of the situation, that Jude Bellingham’s next club will be Manchester City.

Sportsmail understands that the Premier League champions, along with a number of key rivals at home and abroad, are keen on taking the 19-year-old midfielder from Borussia Dortmund.

And they are now being viewed as the likely winners of what would be a major transfer battle.

Relations between City and Dortmund are strong, following Erling Haaland’s summer switch between the two, and initial conversations have been held at City’s end.

A move may not materialise for some time, with the prospect of a strong performance at the World Cup pricing the England man out of the market.

It is, however, highly unlikely that he will see out his contract in Germany.

City boss Pep Guardiola was gushing in his praise of Bellingham when the two sides clashed in the Champions League this season, calling him ‘the whole package’ and hailing his development following his arrival at Dortmund from Birmingham City.

‘He was 17 when he arrived but it was not just about his quality, how he was leading, his kicking, going to the referee,’ he said.

‘This guy was something special in terms of his mentality. Now he is 19 and he is already one of the captains.

‘The quality, everybody knows it. The whole package is really good.’

Liverpool and Real Madrid are among those in the hunt.

Bellingham has been in electric form this season, with nine goals from 20 games.

He will be expected to carry that into the World Cup with England, with growing expectation he will play in a midfield pairing alongside Declan Rice.

Bellingham has 17 senior caps for England and is being tipped to be one of the breakout stars of the tournament in Qatar, which gets underway on November 20.