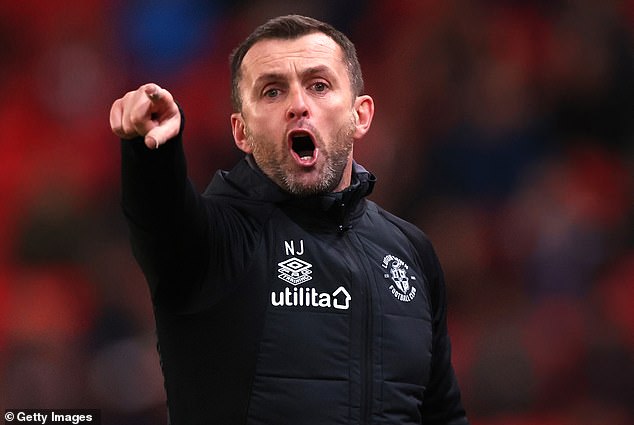 Nathan Jones is finalising deal to be new Southampton manager, with Welshman expected in the stands at St Mary’s TONIGHT for Carabao Cup tie against Sheffield Wednesday

Southampton are on the verge of completing the appointment of Nathan Jones as their new manager.

Jones has been in Southampton on Wednesday finalising his move from Luton Town to become Ralph Hasenhuttl’s successor at St Mary’s.

Southampton were given permission by Luton Town on Monday to hold talks with Jones following their trip to his former club Stoke on Tuesday night.

Jones was under contract at Luton until 2027 and the two clubs are understood to have agreed a deal worth an initial £3million with further performance-related add-ons.

Some of Jones’ backroom staff at Luton could follow him to Southampton with assistant manager Chris Cohen and first-team coach Alan Sheehan part of the Welshman’s trusted team at Kenilworth Road.

Jones was Southampton’s No.1 target to replace Hasenhuttl, who was sacked on Monday, and he has been in the city today putting the finishing touches to negotiations and his move.

Jones was Southampton’s No.1 target to replace Ralph Hasenhuttl, who was sacked on Monday

He is expected to be in the stands for Carabao Cup tie against Sheffield Wednesday and could be in position to take training for the first time on Thursday.

Southampton’s hope was to have Hasenhuttl’s replacement in place for Saturday’s trip to Liverpool.