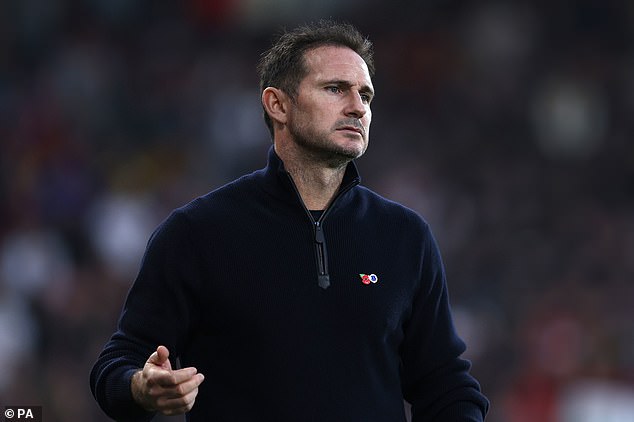 One thousand miles travelled in the space of five days and all to see an aggregate defeat of 7-1. Everton fans could be forgiven for giving Bournemouth away a miss next year — if they are still in the same division, that is.

Worryingly for those supporters, it is Everton who look more destined for the drop than their hosts this afternoon, even though Bournemouth were written off as relegation certainties before a ball had even been kicked this season.

Frank Lampard’s side were humiliated here in the Carabao Cup on Tuesday and thoroughly outclassed today. One win in eight makes for grim reading for Lampard, who is suddenly under all kinds of pressure. Toffees owner Farhad Moshiri is not a man renowned for his patience and the Lampard-led celebrations at Goodison Park after survival was secured against Crystal Palace last season feel like a lifetime ago.

Make no mistake, Everton are abject at the moment.

They have scored 11 goals all season, but are somehow becoming more toothless by the game. And the defensive solidity that appeared to have arrived with Conor Coady and James Tarkowski in the summer seems to be on the wane, too.

In fairness, the pair were let down by their goalkeeper this afternoon — and if this match was painful viewing for those of an Everton persuasion, Gareth Southgate won’t have been delighted with what he saw either.

Jordan Pickford was to blame for Bournemouth’s opener, spilling an easy catch under little pressure straight to goalscorer Marcus Tavernier. It was the kind of howler he has largely eradicated from his game in the last few years, but also the sort which could cost England dear if repeated in Qatar.

Back in the Vitality Stadium, in the end his mistake made little difference to the outcome as Bournemouth ran riot — Kieffer Moore and super sub Jaidon Anthony sealing victory. Superior in every department, a team which came into this game on the back of three straight league defeats turned an already miserable week for Lampard into one which leaves his job in jeopardy. It was no surprise when the travelling contingent loudly booed Everton’s players at full-time.

Lampard made nine changes from the team that were embarrassed here on Tuesday and the first chance fell his side’s way. Demarai Gray’s cross was deflected into the path of Neal Maupay in the area, but the Frenchman’s shot on the turn floated over Mark Travers’ goal. As it turned out, that was as good as it would get for the visitors.

Bournemouth first threatened after 10 minutes, Tavernier racing up the right after combining well with Dominic Solanke, but his shot was straight at Pickford.

Tavernier did beat Pickford eight minutes later — and the England man gave him more than a helping hand, too. Solanke won the ball in the air and curled an effort towards the middle of the goal. Pickford should have claimed the ball with ease, but instead dropped it straight into the path of Tavernier, who slotted home. ‘You’re just a s*** Aaron Ramsdale,’ sang the home fans behind the goal, in honour of their former keeper, to rub salt into Pickford’s wounds.

Pickford was picking the ball out of his net again before long, though this time he was blameless. After making a good save to deny Philip Billing, Tavernier headed the ball towards goal and Moore powered another header home.

The goal was shrouded in controversy, however, as Everton defender James Tarkowski was lying prone on the floor in front of the goal throughout, after clashing heads with Solanke.

Everton’s players were in disbelief as to why referee Craig Pawson didn’t stop the game, but the goal stood. This time the home fans turned their jibes on Lampard. Whether or not he is in fact sacked tomorrow morning, you imagine the next month will not be a relaxing one for the 44-year-old, with Everton 17th and just two points off the drop as the Premier League pauses until Boxing Day.

A weak Alex Iwobi effort was all they could muster in response in the first half. They were nearly handed a lifeline when Lewis Cook thundered into Amadou Onana on the cusp of half-time, but VAR Tony Harrington deemed the tackle unworthy of a red card.

If Lampard lambasted his players during the break, it had no effect. Bournemouth twice came close to making it 3-0, first from a Billing header that went narrowly wide and then a Tavernier shot that Pickford stopped.

The goal was coming, and substitute Anthony delivered it just two minutes after coming on. Utterly unmarked after Cook whipped in a free-kick, the goal was at his mercy and he headed home.

Solanke found the net again soon after but the linesman’s flag spared Lampard even more embarrassment with chairman Bill Kenwright in attendance. Whether Kenwright and Moshiri have been sharpening their managerial axe remains to be seen, but Lampard can’t have many complaints if they are.

As for Bournemouth, who have climbed to 13th in the table, it seems Marcelo Bielsa is primed to take the reins from caretaker Gary O’Neil. If that is the case, O’Neil can reflect on a job well done in his three months in charge. A feeling Lampard may struggle to relate to.

Dominic Solanke (L) scored a fourth for the hosts, but it was ruled out due to an offside call