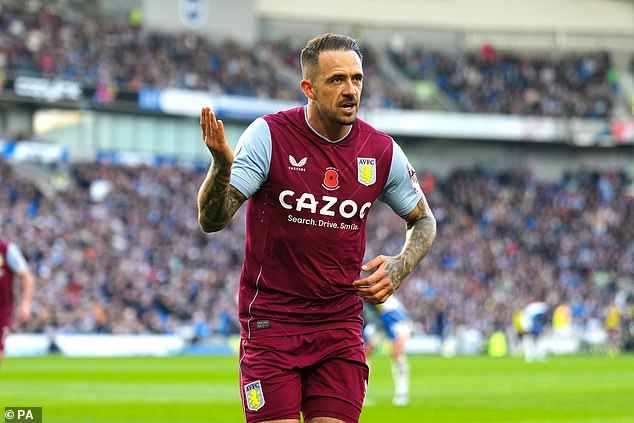 To begin with, a first home Premier League victory over Manchester United for 27 years. Then a long-awaited first away league win of the season.

As a start to his top-flight return, this could hardly have gone much better for Unai Emery.

What looked like being a landmark day for Brighton ended up as one for Aston Villa and Danny Ings.

Brighton’s quickest every Premier League goal from Alexis Mac Allister gave Brighton a perfect start as they went in search of the victory that would have left them in the top six at Christmas, what would have been an all-time high.

Two goals from Ings either side of half-time, though, including the 100th league strike of his career, turned the game around for Aston Villa.

Brighton could consider themselves unfortunate having started and finished the stronger and also had a big second-half penalty shout ignored despite a VAR review after Lucas Digne’s hefty challenge on Solly March.

But it was what happened in the middle of this game rather than at both ends which was ultimately decisive.

The start might well be a talking point when two of Argentina’s players involved in the game’s opening goal meet up ahead for the World Cup.

Emiliano Martinez was in high spirits as he ran out for his warm up in jovial conversation with Brighton midfielder Alexis Mac Allister.

Forty nine seconds in, Mac Allister wiped the smile off his countryman’s face.

Martinez was partially to blame too, giving Douglas Luiz a pass he could have done without as Mac Allister lurked close behind.

Mac Allister duly pounced and smashed the opening past Martinez with Villa’s appeals for a foul on their Brazilian midfielder ignored.

Luiz would later get his revenge but Villa clearly had not learned their lessons about playing out from the back, having also had issues when trying to implement Unai Emery’s instructions at Manchester United in their midweek Carabao Cup defeat.

They continued to have more teething problems early on here with Martinez booting another pass straight into touch.

But he did eventually get one right, creating a chance which signalled the start of Villa’s improvement.

Ings raced onto Martinez’s punt and only an impressive sliding challenge from on-loan Chelsea defender Levi Colwill, on his full Premier League debut, denied Villa’s No.9.

Another slick Villa move down the left required a last-ditch intervention from the alert Pervis Estupinan to prevent it ending with a John McGinn tap in.

But the goal Villa have been beginning to threaten did eventually arrive. Emi Buendia slid a pass through Brighton’s backline which McGinn reached first before tumbling over the sliding challenge of Lewis Dunk.

McGinn was going over before the contact was made but, again, referee Chris Kavanagh was unmoved by the appeals and Ings brought up his century by converting from the spot, Robert Sanchez getting a hand to the striker’s effort but not one strong enough to keep it out.

Sanchez was left helpless for Villa’s second early in the second half.

Brighton had one escape when Buendia headed against the post after Matt Cash squeezed past Estupinan down the right and crossed.

But they failed to clear their lines, Luiz dispossessed the dallying Mac Allister as roles were reversed from the game’s opening goal and Ings twisted past Dunk before finding the bottom corner, his shot rolling past the deceived Sanchez after taking a touch off the unfortunate Colwill.

Villa then had to dig in to try and defend their lead and there were some frantic heart in the mouth moments in and around their box.

Few were bigger than the Brighton penalty appeal as the game entered the final 20 minutes.

March pounced on a loose touch from Digne and got to the ball first before being wiped out by the Frenchman who was already mid-swing with his attempted clearance as the Brighton winger moved in.

Once again, and somehow on this occasion, the officials saw no offence, though the Villa bookings and timewasting racked up as the final whistle drew nearer.

Leandro Trossard might have levelled for Brighton and Colwill should have with an 88th minute free header.

Equally, Ashley Young could have settled it for Villa. It proved to be Ings who did that.

Recap as Sportsmail’s provided live coverage of the Premier League clash between Brighton and Aston Villa.