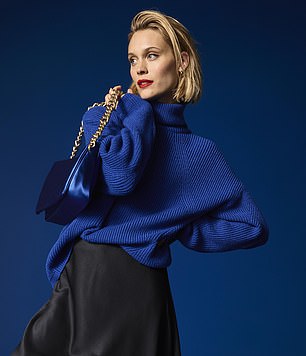 Marks & Spencer is braced for its energy bill to rise by £100million next year, as its boss Stuart Machin launched an impassioned plea to Jeremy Hunt to help the high street.

Machin wants the Chancellor to slash business rates, which are another huge burden on retailers.

The projected increase in fuel costs next year follows a £40million increase this year, denting profits.

Store chains are increasingly fearful over spiralling costs – made even worse by a hike in business rates, which are due to rise 10 per cent next year, leaving companies to pay an extra £2.7billion in total.

Machin, credited with playing a major role in the fashion and food group’s ongoing revival, wants an overhaul of the business rates system. He branded the current levy ‘daylight robbery’.

He said: ‘I’m committed to having great shops. While others go online, or go bust, we are investing heavily in stores [to complement the digital shop].’

He described the M&S store at Marble Arch as ‘decrepit’, a word likely to infuriate campaigners trying to preserve the flagship store in London, which has been earmarked for redevelopment.

Machin has previously lambasted the deterioration of Oxford Street, where the store is situated, as a ‘dinosaur district’ of vacant units and ‘tacky candy shops’.

He stressed that M&S and fellow ‘bricks and mortar’ retailers employ millions and support UK farms but are at a disadvantage compared with online shops.

‘Running a shop costs a lot more than running an online business, and a large part of that is down to business rates which have zero link to profits or, indeed, reality,’ he said.

‘Rates have gone up by the same amount as retail property values have gone down. Frankly, it’s daylight robbery. It’s why high streets and city centres are increasingly full of vacancies and dodgy shops.

‘As retailers, our job is to innovate and take the tough decisions to keep our businesses going and – if we can – growing in really tough times.

‘All we ask from Government is a fair shot. We don’t want handouts, we just want fairness.’