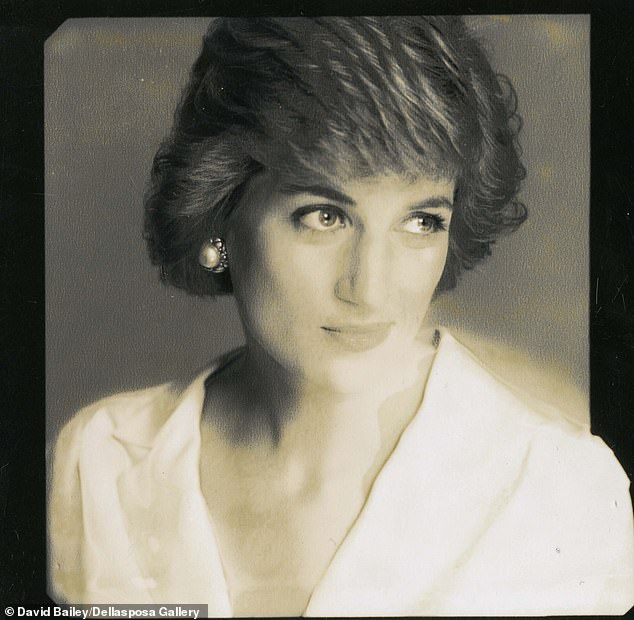 Legendary photographer David Bailey has put his private collection of rare celebrity Polaroids up for sale as part of a ‘lucky dip’.

Princess Diana, Jerry Hall and Kate Moss are just a few of the famous faces that feature in the new exhibition Bailey: Vision and Sound at the Dellasposa Gallery in London.

Members of the public can pay £1,200 to be entered into the one-off prize draw to win one of the iconic photos, which are displayed in glossy three-by-four inch frames.

Along with their randomly-selected photo, winners will be sent a certificate of authenticity and an envelope signed by Bailey himself.

The gallery describes the lucky dip approach as giving ordinary art enthusiasts a ‘rare opportunity’ to own a piece of Bailey’s ‘visual treasure trove’.

Princess Diana – pictured at the age of 27 – was photographed by David Bailey in 1988. The Polaroid is part of the artist’s new exhibition at the Dellasposa Gallery in London.

Jerry Hall was one of David Bailey’s biggest muses throughout his career. Members of the public can pay £1,200 to enter the gallery’s ‘lucky dip’ and win one of the 120 Polaroids at random

Kate Moss is another model the photographer has captured multiple times throughout his career. These 120 Polaroids were part of David Bailey’s private collection until now

As an early adopter of Polaroid cameras in the 1950s, Bailey, now 84, gained access to some of the world’s most famous models, musicians and historic figures over the course of his 63-year career.

Although more advanced cameras continued to come onto the market, the gallery says Bailey ‘religiously’ photographed his subjects with Polaroids and kept a select number of the images in his own archives.

What’s more, Bailey also photographed Princess Diana in 1988 before then being asked to capture the Queen on film to mark her 88th birthday in 2014.

Left: Noel Gallagher – pictured by David Bailey in the 2010s – is one of a handful of men who feature in the collection. Mick Jagger features several times in the new collection of rare David Bailey Polaroids

The gallery describes the lucky dip approach as giving ordinary art enthusiasts a ‘rare opportunity’ to own a piece of Bailey’s ‘visual treasure trove’. Pictured: the 120 Polaroids featured in the new exhibition

In 2014, David Bailey was asked to photograph The Queen for her 88th birthday

Speaking to The Telegraph in March, he recalled how his assistant dropped a light on Diana’s head during their shoot.

Although the first thing that crossed the photographer’s mind was ‘oh f***!’, Baileu says Princess Diana was incredibly forgiving about it all.

He explained: ‘She said: “Don’t think about it; it was a terrible accident”.

‘I told her she had been very magnanimous – that’s right, because she asked me what magnanimous meant.’

During the interview, David recalled how one of his assistants dropped a light on Diana during the shoot (pictured, at work in the Vogue studio in an undated picture)

English portrait photographer Norman Parkinson was initially suggested to take photos of Diana,however the royal herself chose Bailey – who had previously shot Princess Margaret’s husband, the Earl of Snowdon.

Elsewhere in the interview he explained how Diana’s hair was ‘solid as a plastic dummy’ because of the ‘hairspray.’

Meanwhile the 83-year-old also revealed how he asked the Queen if her ‘jewels’ were real when she sat for him in 2014 to mark her 88th birthday.

Recalling the conversation, he explained: ‘I said: “I bet that cost a few bob, girl”.

‘It just came out. I call everyone ‘girl’. But she was girlish. Made a real effort. We had a laugh.’

He continued: ‘Beautiful skin, the Queen.’

The photographer (pictured in 1984 with former wife Marie Helvin) has come to define the Swinging Sixties with his iconic black and white images of pop stars, models, politicians and royalty

David is known for his eye-catching black and white portraits. Pictured is his snap of Mick Jagger and Chrissie Shrimpton

His low-key interview was a far-cry from his 1960s heyday when he bagged some of the world’s most beautiful women including Julie Christie and Marie Helvin.

Marriage to his first wife, typist Rosemary Bramble, lasted five years ending in 1964. He then married the French actress Catherine Deneuve in 1965, which ended in 1972.

Then he wed American model Marie Helvin in 1975, which lasted ten years. Bailey has clocked up 35 years of marriage, so far, with model Catherine, who at 59 is 24 years his junior.

They met when she was just 19, on a fashion shoot for Italian Vogue on the Isle of Skye, and they have three children.

He is currently married to his fourth wife Catherine Dyer, who is 23 years his junior, and the pair have three grown-up children together.

David was appointed a CBE by the Queen in 2001 for services to art.