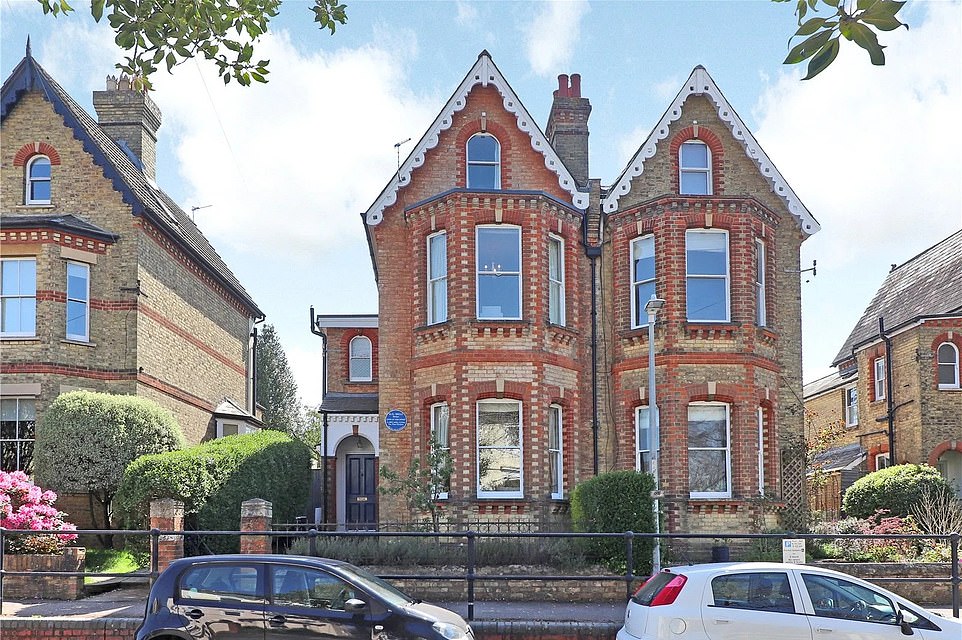 A four-bedroom semi-detached house in Sevenoaks, Kent, where HG Wells lived while writing The Time Machine is for sale for a significant £1.4million.

The pretty Victorian townhouse was where the writer lived in 1894 while penning the science fiction novel.

The house’s price tag is almost twice the average for semi-detached homes in the area, with typical values for all properties standing at £540,454, up 7.9 per cent in the past year, the equivalent of £41,000.

It is enough for buyers to wish they could travel back in time to enjoy a period when house prices were cheaper and more affordable.

This four-bedroom semi-detached house in Sevenoaks, Kent, where the author HG Wells lived, is for sale for £1.4million

The property is called Tusculum Villa and has been extended and improved over time to include three floors and four bedrooms.

HG Wells was best know for his science fiction novels The Time Machine and the The War of the Worlds.

He also wrote a number of utopian works and foresaw the advent of space travel and nuclear weapons, along with something resembling the World Wide Web.

The interior of the Sevenoaks property today has less of a futurist feel. Although updated, it retains many period features, including a large fireplace and ornate coving in the main living room.

There are bay windows in that same room as well as in one of the bedrooms, along with sash windows.

There is a vaulted family room at the rear of the property and a useful cellar storage room, And there is a terrace with steps leading to the garden, which has a lawn and a shed.

The dining room has a fireplace, a ceiling room and wooden flooring, with space for a dining table that seats eight people

There is a vaulted family room at the rear of the property, currently providing a separate space for children to play in

The average price of a sold property in Sevenoaks during the past 12 months is £716,528.

At the same time, the average price of a British home is £327,693, according to property website Zoopla

The property is on Eardley Road in Sevenoaks, which is well placed for both the town centre and mainline station.

There is parking on the street, which is time restricted for non-permit holders. There is a charge of £50 for residents permits, which can be obtained from the council.

Daniel Copley, of Zoopla, said: ‘This charming Victorian home is brimming with sought-after features and has literary links, while for lovers of the great outdoors, the property is just a stone’s throw from picturesque Knole Park.’

The appealing property has four bedrooms, including this one with a fireplace and a large bay window

A terrace near the house leads to the garden, which has a path leading through a large lawn area and some mature planting

The good sized garden has a garden shed, and currently also houses a children’s play area and some separate seating