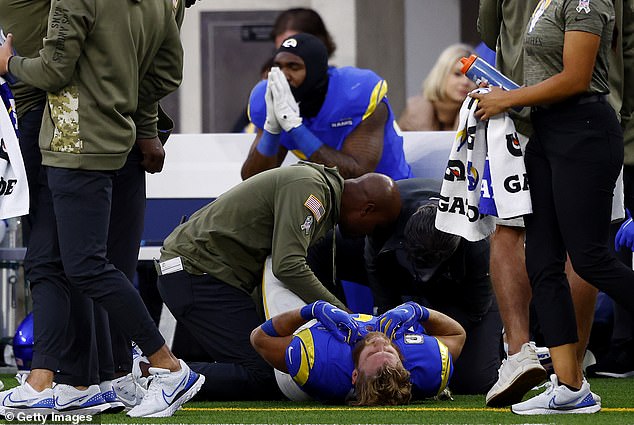 By Ap and Alastair Talbot For Dailymail.Com

This season has just gone from bad to worse for the LA Rams – the reigning Super Bowl champions – after wide receiver Cooper Kupp injured his ankle in the fourth quarter of the team’s 21-17 loss to the Cardinals in Week 11 of NFL action.

The Super Bowl MVP landed awkwardly while trying to catch a high pass from backup quarterback John Wolford, coming down on his right leg with 14:18 remaining and the Rams trailing 17-10.

Coach Sean McVay didn’t provide clarification on Kupp’s injury in his comments after the game, though he didn’t sound optimistic for the near future.

‘I just know it didn’t look good, it didn’t sound good,’ he said.

Cooper Kupp injured his ankle in the fourth quarter of the Rams’ loss to the Cardinals, Sunday

Kupp stayed down on the sideline and was attended to by trainers before hopping to the bench without putting any weight on his leg. He was eventually able to walk back to the locker room with 12:44 to play and did not return.

The 29-year-old’s injury is the latest blow to the Rams’ playoff hopes, with the team now 3-6 overall and having to win at least three of its last eight games to protect its championship defense.

Quarterback Matthew Stafford did not feature on Sunday due to failure of clearing NFL concussion protocols. Wolford stepped in his shoes but looked rusty behind a stopgap offensive line, as he was sacked three times and threw an interception.

To make matters worse, the Rams’ offense finished with 256 yards, their third straight game with less than 300 yards and fifth of the season. It was also the fifth time the Rams have failed to score more than 17 points, including each outing during their current three-game losing streak.

‘Not a lot of positives that you can take away from this,’ McVay said in his postgame comments. ‘It’s tough, it stings. There’s just a lot of different reasons that we’re in this position.’

No injury update has been updated since Sunday’s game, as the Rams now have a 3-6 record

Kupp, who last season led the NFL in receptions, yards receiving and touchdown catches, had three receptions for minus-1 yard. He still leads the team with 75 receptions for 812 yards and six touchdowns this season.

It was the second straight home game where the Rams left the stadium with concerns about Kupp. He avoided serious injury when he rolled his ankle late in the 31-14 loss to the San Francisco 49ers on October 30.

‘I mean, he’s arguably the best receiver in the league,’ said Wolford, who was 24 of 36 for 212 yards with one touchdown and one interception. ‘He’s a great leader for us. And we’ll definitely feel the impact of him not being out there, but guys got to step up and we got to rally if he’s not able to go.’

This is the first time the Rams have been three games under .500 in McVay’s six seasons. The 36-year-old is most troubled by the team’s inability to get better.

‘Whatever that means in terms of the results, we just have to be able to have a better product out there, start to see some improvement,’ McVay said. ‘And that’s the challenging thing is there really hasn’t been examples of that occurring, and so got to be able to look at some of the things that we’re doing process-wise.’

‘I got to be able to look at myself in the mirror and figure out what are those things, ’cause I feel very responsible for us being in this position.’

The down-looking Rams next play the Saints, whose hopes of making the playoffs are also on life support with a 3-7 record. LA last won an NFL game nearly a month ago in a 10-24 win against the 1-5 Panthers.