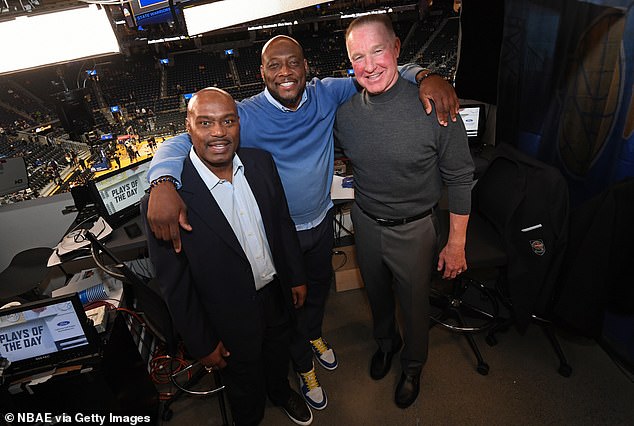 Tim Hardaway has apologized for making a distasteful ‘rape’ comment during the live broadcast of the Warriors-Spurs game on Monday night after he admitted to having ‘barely paid attention’ to NBC’s pregame meeting that detailed on-air dos and don’ts.

In the broadcasting booth for the first time – along with Golden State alumni, Chris Mullin and Mitch Richmond – the man once called ‘Mr. Crossover’ was part of the special ‘Run TMC Takeover’ for the evening and had been talking about a block from Draymond Green on NBC’s Sports Bay channel when he said:

Hardaway, Richmond and Mullin all played together in the Bay Area from 1989 until 1991

Mullin and Richmond, who were Hardaway’s teammates in the Bay Area from 1989 to 1991, did not react to the insensitive comment, focusing instead on the game.

However, once the Warriors had put the Spurs out of sight in the fourth quarter, Hardaway issued a groveling apology on-air.

‘I used a poor choice of words earlier in the broadcast,’ the former point guard said. ‘I want to apologize for that. Let’s get back to the game and let’s finish the game off with a 30-point win and go home happy.’

The mistake came shortly after Hardaway admitted he had ‘barely paid attention’ to the production meeting ahead of the broadcast, which saw him make his debut as a play-by-play announcer.

On the 45-minute call, it was revealed that a producer ran the team through what they needed to do to prepare, as well as detailing what they could and couldn’t say while they were live on air.

Instead, it is claimed Hardaway and his former teammates were happy to ‘rely on their pre-existing knowledge of the team and the organization’s history to carry them through’.

The Warriors ended up sweeping the Spurs, 132-95. Jordan Poole scored 36 points, while Steph Curry had a quite night by his standards, putting up 16 points.

For San Antonio, Keldon Johnson scored a team-high of 15 points.

Earlier in the evening, Warriors fans paid tribute to Hardaway by giving him a round of applause after he was named into the Naismith Basketball Hall of Fame a month ahead before the start of the NBA season in October.

Hardaway and Richmond had never previously appeared on TV as play-by-play announcers before, while Mullin is currently an analyst for NBC’s local coverage of the Warriors, before and after games.

‘It was very special. When I was here as an assistant I got to enjoy Timmy and Mully — Mitch was gone,’ Spurs coach Gregg Popovich said. ‘It was cool, it was fast-paced, it was creative. The people really bought into it. It was a wonderful time in the NBA. These guys were one of the best shows available, for sure.’

The Spurs will continue their West Coast trip with a visit to Portland on Tuesday night, while the Warriors will face the Suns in Phoenix.