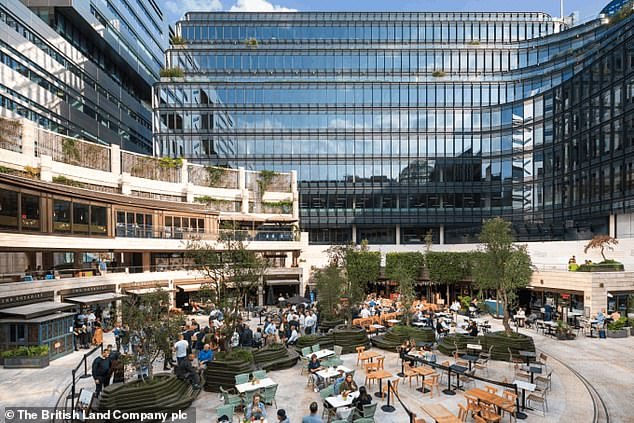 British Land has become the second UK property developer this week to report a loss as property valuations tumble amid growing economic uncertainty.

The FTSE 100 company, which owns the Sheffield Meadowhall and Drake Circus shopping centres, reported a £34million loss for the six months ending September, having made a £370million profit during the same period last year.

Successive interest rate hikes by the Bank of England to combat rising inflation, partly resulting from soaring energy prices, have led to enhanced property yields and depressed values across the firm’s estate.

Valuation: There was a major fall in the value of British Land’s London office portfolio, despite healthy demand from clients in the financial, creative and professional services sectors

All divisions of the business saw a drop in portfolio valuations, with retail parks witnessing the biggest decline as investment volumes slowed over the summer due to rising finance costs.

There was also a significant fall in the value of the group’s London office portfolio, despite healthy demand from clients in the financial, creative and professional services sectors.

In total, British Land’s holdings were worth £9.64billion at the end of September, a slump of around £800million on the previous year, thereby causing the company to post a loss.

Its trading update comes a day after fellow real estate developer Land Securities reported it had plunged to a half-year loss, following a substantial decline in the value of its property portfolio.

Like British Land, the Bluewater shopping centre owner witnessed a downturn in valuations across its estate, though the biggest decline was noted in the City of London office buildings portfolio.

However, on an underlying basis, British Land saw its earnings rise by 13.3 per cent to £136million thanks to robust growth in rental income and good cost management.

Part of the bump in leasing income derived from the recent acquisition of retail parks across Southern England, an increasingly popular proposition with retailers given their smaller occupancy costs.

Further uplift came from the recently completed 1 Triton Square development in the Regent’s Place campus in London, where The Gym Group has signed a new lease for a flagship gym.

‘Our good operational performance in the half reflects the high quality of our portfolio and reinforces our conviction in our value-add strategy, which is focused on sectors with pricing power,’ said Simon Carter, British Land’s chief executive.

The company presented an optimistic outlook, telling investors it expected further rental growth in the second half of the financial year, supported by low vacancy rates across prime London office territory.

But, with a weaker economic backdrop marked by rising interest rates and inflation hitting consumer incomes and business investment plans, demand to lease office and retail space remains under pressure.

Richard Hunter, the head of markets at Interactive Investor, remarked: ‘Given British Land’s exposure to the office and retail sectors, the screw is inevitably tightening.

‘The return to the office post-pandemic has not been fully established given the rise of hybrid working, while in retail, the weakening economic environment has put pressure on the sector as a whole, with some smaller players going to the wall.’

British Land shares were 1.7 per cent down at 389.2p on Wednesday afternoon, meaning they have lost about 23 per cent of their value over the past six months.