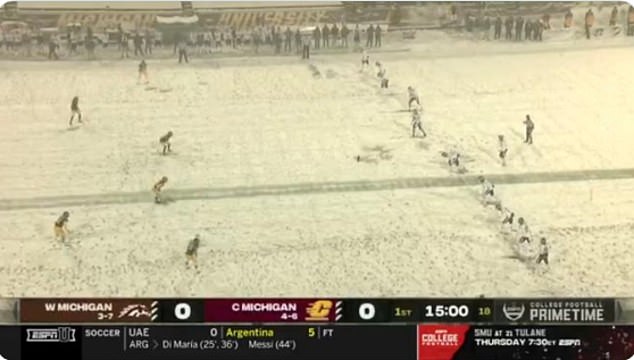 It’s snow joke! College Football rivalry game goes ahead in blizzard in Michigan with fans left in awe at ‘beautiful’ scenes… while one keeps warm by building a snowman

Central Michigan and Western Michigan faced off in the ‘Battle of the Cannon’ in blizzard-like conditions Wednesday.

The conditions could only be described as beautiful by the purest of football fans. Such scenes could happen in the NFL in Orchard Park, New York on Sunday.

Reactions from fans and media members poured in across social media while the game was played in enough snow that grounds crews struggled to keep the yard markers on the field visible.

A college football fan said: ‘The Western Michigan vs. Central Michigan game is a thing of beauty!!’

Another post on Twitter read: ‘Central Michigan playing Western Michigan for the victory cannon on a Wednesday night in a foot of snow is what America needs every day.’

Workers resorted to using a bulldozer to keep the center of the field and the endzones clear enough to be visible.

Much of Michigan was under warning from a winter storm advisory as parts of the state was forecasted to receive up to 12 inches of snow.

The rivalry game remained low scoring throughout the early portions in the game as one would expect from a game in such harsh conditions.

At halftime the score between the two teams was 7-7 with both teams scoring on huge 50+ yard touchdowns, and after another point-starved half the Western Michigan Broncos eventually ran out 12-10 winners over their Central Michigan Chippewas rivals.

The results takes both teams’ record for the season to 4-7.

Western Michigan’s social media team even had some fun thanks to the weather after they replied to a clip of the Miami (OH) and Northern Illinois game which was played in snow flurries by saying ‘That’s not snow… this is snow.’

While one fan referenced the Buffalo Bills’ NFL game could be impacted by snow this weekend.

The post read: ‘This central Michigan game on espnu is crazy. Precursor to the Buffalo game this weekend.’

Multiple feet of snow are expected this week in Western New York, where the Bills will host the Cleveland Browns in a Sunday matinee. Stretches of heavy lake-effect snow will be falling between Thursday and Sunday, according to Weather.com meteorologists, meaning the Highmark Stadium turf will likely be impacted.

The local Fox affiliate in Buffalo has described the storm as ‘potentially historic,’ with some meteorologists calling for as much as six feet in the region.