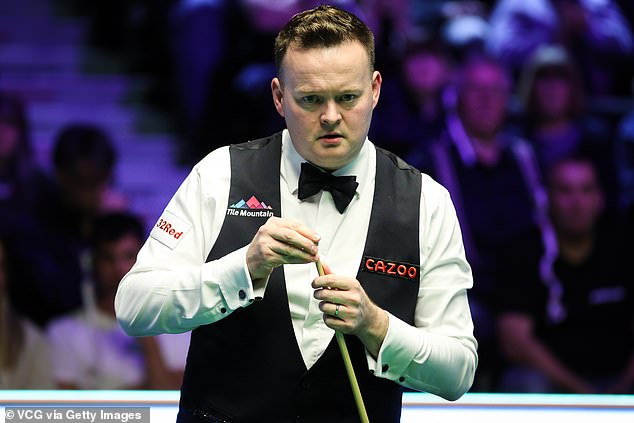 Shaun Murphy has blasted ‘extremely irritating’ Ronnie O’Sullivan for not using his enormous profile to boost the game of snooker.

After seeing off Matthew Stevens in the first round of the Cazoo UK Championship in York, seven-time world champion O’Sullivan claimed once again he ‘didn’t enjoy playing snooker’ and the sport was ‘insignificant.’

It led to 2005 world champion Murphy, in the BBC studio as a pundit, asking O’Sullivan directly: ‘If you don’t enjoy it or like it as much as you say, why do you keep coming?’

Now, world No 13 Murphy, who plays his second round match against Judd Trump on Thursday afternoon, has claimed O’Sullivan doesn’t appreciate how fortunate he is.

‘It’s very frustrating hearing Ronnie and others say it’s just one of those things they do with their life – and that the game means so little to them,’ Murphy said.

‘For players like myself… I don’t have the CV of O’Sullivan, I don’t have what I assume must be an incredible amount of wealth.

‘He comes from an incredibly wealthy background and grew up in incredible wealth. Most of the tour don’t come from that world.

‘It’s OK for him and people like him that have cabinet after cabinet of trophies to say how little the game means to them, but for the rest of us it means an awful lot.

‘I’m only 40 and I remember the village I grew up in and I know the life I would have had but for this game that saved me from a life of complete anonymity. I will never, ever forget that.

‘It is extremely irritating. Ronnie in particular has one of the biggest platforms in the world. I just wish he would use it to help make the game better.

‘It does sometimes feel that most of the tour are pulling in a similar direction and others – and he’s not on his own – are just out for themselves.’

O’Sullivan, 46, dismissed Murphy’s comments when they were put to him following his 6-0 thrashing of Zhou Yuelong in the second round on Wednesday.

‘I’m not interested in what anyone has got to say about me – I absolutely vacated a long time ago,’ he said.

‘I’m just going my own business. I don’t care. I cut off a long time ago. I’m really happy.’

O’Sullivan is aiming for his eighth UK Championship title this week and is in excellent form having won the Hong Kong Masters and the Champion of Champions titles in recent weeks.

‘When I get out there I do my best, whatever that is great. It’s more working on the mental side because technically I’m not great, I have winged it a bit. So that means I have to work more on the mental side if I want to put in a half decent performance.’

‘In some ways I’m a lot happier when I’m not doing so well on the snooker table.

‘The year I got to five finals, a lot of people see it not as a success, but I enjoyed my snooker more that year than any other because I was trying when I felt like it and if I didn’t I would accept it wasn’t my day and go home.’