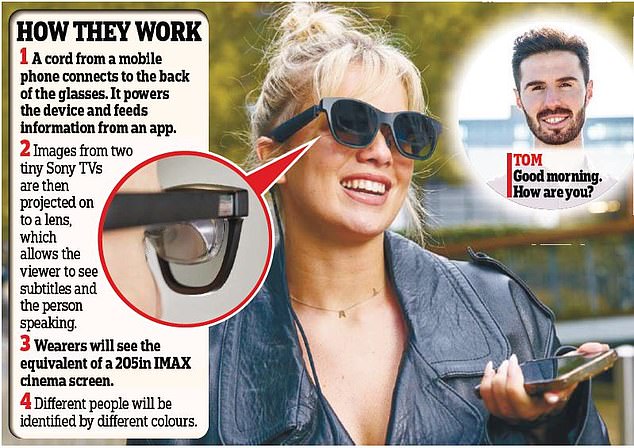 Sight and sound: Smart specs costing £400 can rewind conversations in front of your eyes

By Jim Norton Technology Editor For The Daily Mail

It is easily done – not quite catching what was just said in a conversation.

Now a new pair of glasses can come to the rescue by rewinding the chat in text in front of your eyes.

The £400 smart spectacles, made by British technology firm Xrai Glass, are designed for people who are hard of hearing, but they can help others too.

Wearers say ‘Hey, Xrai’ for a recap of what was just said with the glasses showing a text summary. The specs can also translate other languages into English.

Comparing the glasses to Amazon’s voice-activated personal assistant, Xrai said they were like ‘Alexa… but for your eyes’.

It predicted they may one day be available as contact lenses.

Former Love Island star Tasha Ghouri (pictured at the ITV Palooza yesterday), 23, who was the first deaf contestant and is an ambassador for Xrai, said she cried tears of joy when she tried the technology

The glasses, which weigh under three ounces and have darkened lenses, are connected to the user’s smartphone and project images by using tiny Sony TVs.

The experience is said to be the equivalent of watching a 205-inch IMAX cinema screen.

Xrai said wearers will be able to see the person in front of them and subtitles of what they are saying in real-time.

Different people in a group conversation will come up under different colours so the wearer can tell who is talking. Users will have to buy the glasses, but the basic version of the Xrai app is free.

Extra features come in a monthly deal costing up to £49.99.

Xrai said the device will also allow users to ask questions, such as what the weather is like, with the answers instantly appearing as subtitles.

The glasses can help out holidaymakers struggling to communicate abroad by translating nine languages, including Mandarin and Spanish.

Former Love Island star Tasha Ghouri, 23, who was the first deaf contestant and is an ambassador for Xrai, said she cried tears of joy when she tried the technology.

She added: ‘This is really going to change people’s lives.’