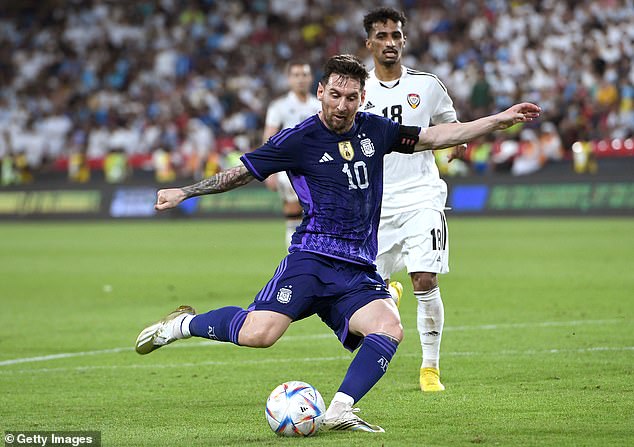 If there were any doubts whether Lionel Messi was feeling prepared for the upcoming World Cup, they’ve surely been put to bed now.

The Argentina forward starred in his country’s 5-0 win over the UAE on Wednesday night and chipped in with a sensational goal in the process.

The extraordinary finish sparked frenzy on social media as a number of fans took it as a sign that the PSG star is ‘ready to claim the World Cup’ in Qatar later this month.

In the 44th minute of the friendly, Argentina put together their best move of the match. Brighton’s Alexis MacAllister neatly backheeled the ball to Messi, before shifting it to Angel Di Maria.

The Juventus winger chopped inside before giving the ball back to the PSG star, and the rest was vintage Messi. He shaped up as if he was going to curl it with his left but, instead, dragged it past the defender.

Will the goal at his mercy, he took one look up before smashing the ball – with his weaker right foot – into the top corner of the net.

It was a muted celebration from the seven-time Ballon d’Or winner, who must’ve gotten used to scoring such incredible goals.

The Argentina No.10 dragged the ball past one of the UAE defenders with ease

And, after seeing the strike, fans were not shy about their predictions for Argentina’s Qatar World Cup campaign.

‘Bro is ready to claim the World Cup’, one fan insisted. ‘World Cup champion. Calling it’, another said in reply to a video of the goal.

‘That was a very difficult angle but he made it look easy’, one fan wrote in their analysis of the goal.

One user highlighted the fact Messi struck the shot off his right boot, as they said: ‘This man’s “weak foot” is better than most players dominant foot’.

And, as usual with a viral video of the Argentinian maestro, there were suggestions that Messi is ‘easily the greatest player of our generation’.

Argentina took the lead when Messi collected a pass from Di Maria and found himself with the goalkeeper to beat, but unselfishly set up Alvarez for his third international goal in the 17th minute.

He struck again in the 36th as he dribbled past several UAE defenders and slotted home, while substitute Correa completed the rout following the break with a deflected goal in the 60th minute.

It’s a promising way to come into the World Cup, as Scaloni’s side extended their unbeaten run to 36 games.