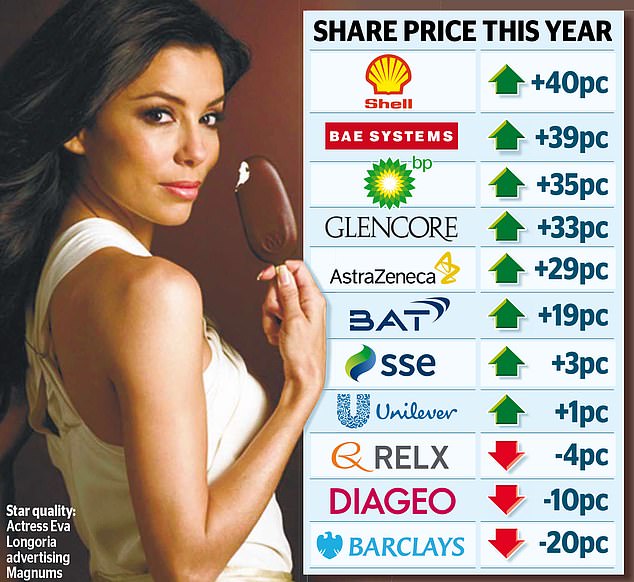 Back equity income in the Year of Yield: Trusts paying top dividends despite UK’s bleak outlook

By Anne Ashworth For The Daily Mail

Even those usually minded to back Britain can find reasons to avoid the UK stock market at present. The Autumn Statement laid bare the challenges facing the economy, which have caused global investors to turn more bearish on British shares.

As a result of this disaffection, the value of the Paris stock market, with its preponderance of luxury goods giants, has on some measures edged ahead of London.

Businesses such as Louis Vuitton Moet Hennessy, whose brands include Tiffany and Tag Heuer, are regarded as more resilient in a downturn than, say, Unilever, home of the more prosaic Dove, Domestos and Magnum ice creams.

But there are also reasons to take a contrarian view – if you want to back the potential for recovery through less glamorous names such as AstraZeneca, Barclays and the aforementioned Unilever. UK equity income trusts, a number of them set up in the Victorian era of thrift, are a route to a bet on such companies.

These trusts can provide ballast for a portfolio – and offer a flow of income which is currently being boosted by the profits from the overseas activities of FTSE 100 constituents. So much of the emphasis is being put on income that 2023 has already been dubbed ‘The Year of Yield’.

The UK equity income sector is less dull than it sounds.

The defence, energy and tobacco holdings of some trusts are at the centre of a debate about what constitutes an ethical investment. There is also the possibility of seizing a bargain: Abrdn Equity Income Trust is at a 10 per cent discount to the net value of its assets. Murray Income is at a 7 per cent discount. But a reassessment of the sector may be under way, as the focus turns to the dividends on offer from FTSE 100 members.

Broker AJ Bell says these companies have announced £81.5billionworth of payouts this year, with a further £50.3billion in share buybacks. Darius McDermott, of Fund Calibre, comments: ‘The UK remains one of the best places in the world for dividends – our stock market has a 4 per cent yield.’

The UK equity income trust range includes City of London, set up in 1861 and the analysts’ favourite for 2022 and beyond.

The performance of the trust – which has a yield of 5.1 per cent and stands at a premium of 1.68 per cent – has been driven by Big Tobacco and Big Oil in its portfolio. BAE, the UK’s biggest defence company, is another contentious stake, although war in Ukraine has increased support for the idea that weapons protect democracy.

Schroder Income Growth, whose yield is 4.58 per cent, is also favoured by analysts. This trust, which is at a 1.68 per cent discount, also owns Big Oil.

Murray Income, with a yield of 4.39 per cent, has a mix of mining and energy and owns AstraZeneca, Diageo and Unilever. City of London, Schroder Income Growth and Murray are among the Association of Investment Companies’ dividend heroes, having increased their payouts for more than 20 years. Also on the list are Merchants Trust, which is at a premium of 2.5 per cent and which has a yield of 4.95 per cent, and Abrdn Equity Income, which yields 6.82 per cent.

It is also worth noting that the Ruffer defensive trust, where I am an investor, currently has the highest weighting to ‘cash or cash-like assets’ in its history. Ruffer’s managers say ‘one of the biggest advantages of cash is that it gives you the option to move quickly and pounce on opportunities’. For me, some of these opportunities seem to lie in a spread of UK equity income trusts.