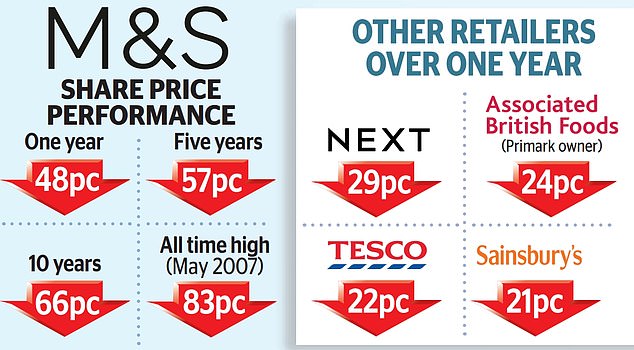 By Anne Ashworth For The Daily Mail

Finally, I am ready to commit. For a long while I have been a keen customer of Marks & Spencer, and have often contemplated becoming an investor too. Now this week’s results have emboldened me to set aside the concerns that have been holding me back.

One of these is the frequent sceptical reaction to my wardrobe from those who should also be fans of autograph and other M&S brands, including Jaeger, the iconic name M&S acquired last year.

They profess disbelief that a smart item comes from M&S and decline to familiarise themselves with the stores or app, persuaded that the 138-year-old stalwart is irredeemably dowdy.

M&S has often seemed determined to confirm this prejudice with less-than-adept merchandising. However, a turnaround process that includes a property reorganisation might finally start to change such perceptions.

The shares, although almost 70 per cent below their level of a decade ago, have risen by 33 per cent over the past month. Could this be because some consider them to be, as the current slogan puts it, ‘Remarksable value’?

Could it be that much of the bad news is priced-in and there are better tidings to come?

Perhaps this seems over-optimistic. There have been many a false dawn at M&S and, in the results announcement, chief executive Stuart Machin warned of a ‘gathering storm’ sparked by inflation.

But I am still going to commit some money to the company since Machin emphasises that M&S caters to a more ‘advantaged demographic’ who are older and less affected by higher mortgage rates. He also reckons that rocketing costs could cause attrition among the competition.

Ian Lance is manager of the Temple Bar Investment Trust and co-manager of the Redwheel UK Value & Income funds, which both hold M&S. His confidence is based on the strong balance sheet and investment in the ‘omnichannel’ (store and online) offering.

He says: ‘The food business has always been a strength, but it has been vastly improved in recent years. M&S food continues to grab market share along with Aldi and Lidl.

High-street stalwart: M&S caters to a more ‘advantaged demographic’ who are older and less affected by higher mortgage rates

‘About 40 per cent of Marks clothing is sold online – and the retailer still has a huge slice of key sections of the clothing market.’

For example, M&S sells 35.6 per cent of bras – model Rosie Huntington-Whiteley has been the face of the retailer’s lingerie collection for more than a decade – and 21 per cent of men’s nightwear.

Even those who are more sanguine about the retailer’s ability to reinvent itself should be aware of the challenges.

If Machin and the other managers achieve their objectives, there will be fewer, but better stores.

Jonathan De Mello of the JDM retail consultancy says that this restructuring is the right thing to do, but highlights the difficulties that arise from local objections to store closures, which are seen as damaging to house prices.

This week M&S defended its controversial plans to redevelop the Marble Arch store in London’s Oxford Street, saying it was standing up for the most famous High Street in the UK.

It is a justifiable claim, but may further infuriate those who face losing their town’s store.

Machin has spoken of his particular resolve to maximise the potential of the loss-making joint venture with Ocado.

Another ambition is to cajole the clientele fond of such M&S treats as Percy Pig confectionery and the rotisserie lunches dished up in in-store cafes into weekly ‘large-basket grocery’ shoppers who also pick up things for their children.

This seems a reasonable ambition. But De Mello points to the disconnect between the Gastropub range and other M&S food specialities and the clothing. He says: ‘How do they win over the fans of the food to the clothing? Maybe more collaborations with designers like those at H&M.’

I will be awaiting this kind of innovation in my new role as customer and concerned shareholder. Setbacks are inevitable. But I hope my faith will be rewarded.