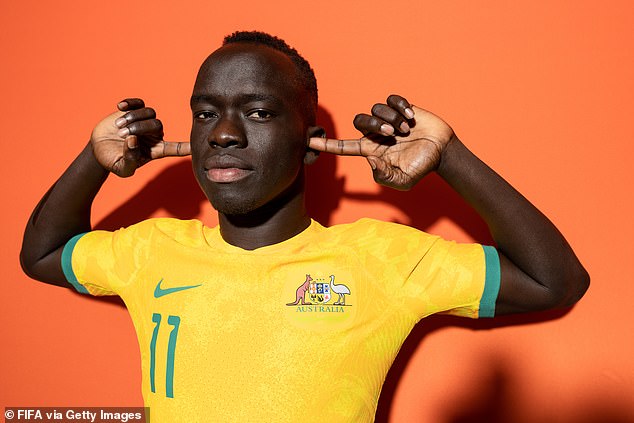 Mabil, the only Australian in the Spanish top-flight, enters the World Cup in Qatar with limited recent game time.

In the past two months, Mabil featured just four times for Cadiz – and he doesn’t know why.

‘The coach … hasn’t really given me a reason,’ Mabil told reporters in Doha on Friday.

‘I couldn’t dwell. I just had to look forward to the future. And the future was the World Cup.

‘For me, I had to be in the best shape that I possibly can and do what I can control and that was my extra trainings when I don’t play.

‘It was very frustrating because I know I can make an impact.

‘For me, it didn’t really make sense why all of a sudden I didn’t come on for especially two or three games in a row, that was strange.’

Mabil controls the ball during the La Liga Santander match between CA Osasuna and Cadiz CF at El Sadar Stadium on August 20, 2022

The 27-year-old said he had to turn the negative into a positive.

‘It brings a new challenge, for me to develop my mind and how I deal with these kind of challenges is something that I had to learn,’ Mabil said ahead of Australia’s World Cup opener against France next Tuesday (Wednesday AEST).

‘I didn’t take it well at the start.

‘But now … I find a way to get the best out of my days every single day and that is what I can control and be happy with that.’