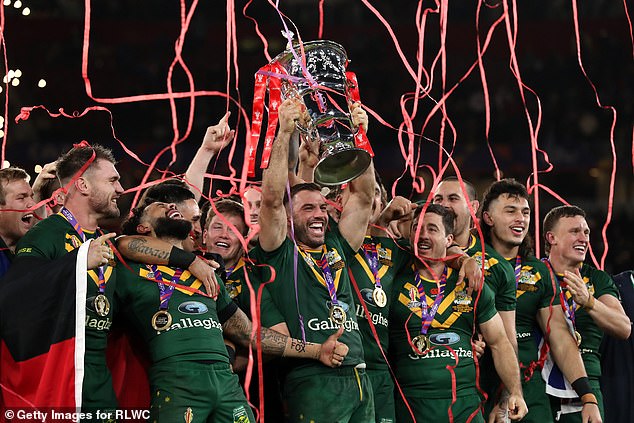 By David Coverdale For The Mail On Sunday

Australia confirmed their status as one of the most dominant international sides in sport by winning the Rugby League World Cup for the ninth time in 10 tournaments.

Despite most of the 67,502-strong crowd cheering against them, the all-conquering Kangaroos ensured there was to be no upset at Old Trafford as they comfortably saw off underdogs Samoa 30-10 to claim their third successive title and 12th overall.

It was a ruthless and professional performance from Mal Meninga’s superstar team, as captain James Tedesco and Latrell Mitchell both scored two tries, while Liam Martin and Cameron Murray also crossed.

Samoa, the first tier-two nation to reach the final, brought the house down with consolation tries from Brian To’o and Stephen Crichton.

But they never threatened a repeat of last weekend’s shock semi-final victory over hosts England, even though Australia had Angus Crichton sinbinned in the second half.

‘It’s an unbelievable feeling,’ said Aussie skipper Tedesco, who played for Italy at the 2017 World Cup.

‘It’s a team full of superstars. We knew we had the individual brilliance but it was just about bonding as a team.

‘We have been getting better and better and this is our best performance as a team. It’s a really proud moment.’

Samoa coach Matt Parish added: ‘We played against a champion team and they were just too good. But I am really proud of what this group have been able to do.’

But even down by a man, they sliced through Samoa as Cameron Murray scored