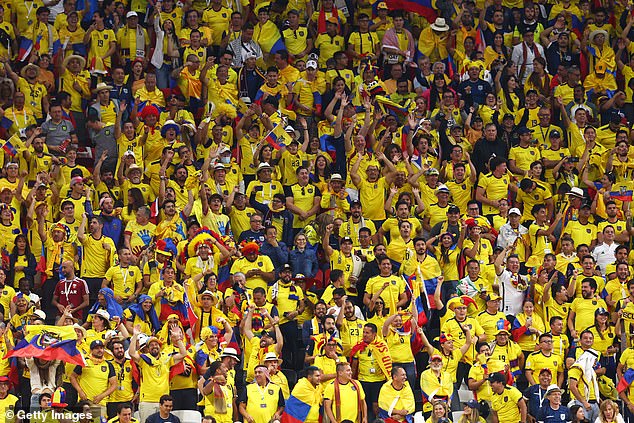 ‘We want beer!’: Ecuador fans poke fun at Qatar during their World Cup opener against the host nation after they banned alcohol sales in stadiums during the tournament

Ecuador fans were heard chanting ‘We want beer’ during their nation’s opening game of the World Cup against Qatar.

The chant was in response to Qatar’s decision to ban the sale of alcohol in stadiums during the tournament.

Despite FIFA having a £63million sponsorship deal with Budweiser, the Qatari royal family made the decision to ban alcohol inside stadium just two days before the start of the tournament.

Supporters are able to buy alcohol in fan zones, but a pint is priced at £12 and individuals are limited to just four drinks each. Alcohol will also be available in hospitality boxes at stadiums.

In normal circumstances alcohol is largely restricted in Qatar apart from in some hotels and restaurants.

Ecuador fans were heard chanting: ‘Queremos cerveza’, which translates to ‘We want beer’.

FIFA president Gianni Infantino dismissed claims from European supporters that the ban on alcohol is unfair.

Infantino said: ‘Honestly, if this is the biggest issue we have for the World Cup, I will sign immediately, go to the beach and relax until the 18th of December.

‘Every decision we take at this World Cup is a joint decision between Qatar and FIFA. I think personally if for three hours a day, you cannot drink a beer, you will survive.’

Californian delivery driver Brian Davidson told that DailyMail.com he was devastated by the ban on alcohol.

He said: ‘I’m devastated, it doesn’t make sense. What’s wrong with having a beer at a match? Beer wasn’t going to be sold inside the stadiums anyhow, just on the concourse.

‘Millions of people are coming from all over the world and they just want to watch football, enjoy the sun and knock back a few beers.

‘I’ll just have to go to the Fan Zones or a hotel for a drink but it’s a real pity that the Qataris have implemented this ban.’