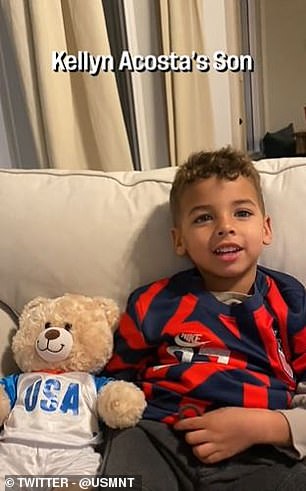 The USMNT squad have been sent touching messages from their families ahead of their opening World Cup game against Wales Monday.

Gregg Berhalter’s team’s wait to make their World Cup bow is almost over with their matchup at 2:00pm ET.

With just 24 hours to go until the USA take to the field at the Al Rayyan Stadium all 26 players received message of support from their loved ones back home – after President Biden wished them luck.

Brenden Aaronson’s parents, grandparents and siblings, as well as the family dog, sent a message of support in the clip shared on the team’s official Twitter account.

The USMNT squad have been sent touching messages from their families ahead of World Cup bow. Kellyn Acosta’s son (L) stole the show alongside Tim Ream’s cheerleading children (R)

The defender’s two sons and daughter, again wearing USMNT team uniform, expressed their ‘excitement’ at watching their dad in Qatar.

The five-minute plus included the families of every player in Berhalter’s roster for the nation’s first World Cup since 2014.

There is still some questions surrounding Berhalter’s best starting line-up but Leeds midfielder Tyler Adams was confirmed as captain Sunday.

In a team meeting, President Joe Biden phoned into the USMNT to offer his support in their attempt to find success in Qatar.

‘Coach, put me in I’m ready to play,’ the President joked at the start of the call.

‘You guys, I know you’re the underdog. But I tell you what man, you got some of the best players in the world on your team and you’re representing this country and I know you’re gonna play your hearts out. So lets go shock ’em all.

‘Keep trusting in one another play as hard as you can and you know for you and your families, your teammates and the whole country is rooting for you.’

The World Cup kicked off Sunday as hosts Qatar were beaten 2-0 by Ecuador. The USMNT faces Wales after England take on Iran in Group B on Monday.