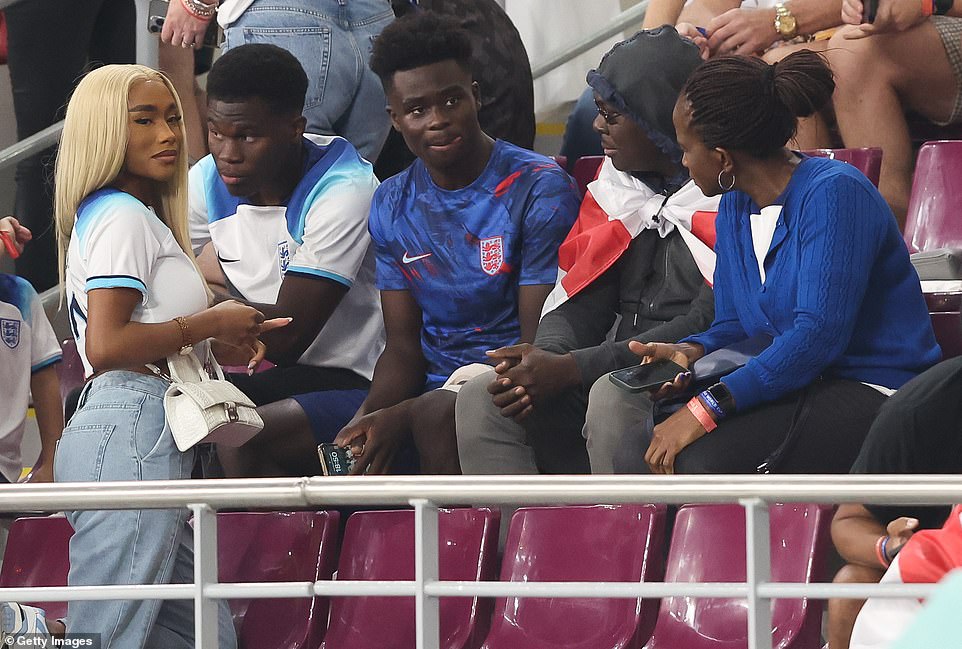 ‘Starboy’ Saka! England fans hail ‘sensational’ Bukayo Saka who put Euro 2020 penalty miss behind him to score TWICE in 6-2 victory against Iran – as he celebrates in the stands after game with girlfriend Tolami Benson, 22

By Alastair Lockhart and Rachel Muir For Mailonline

Praise has poured in for ‘starboy’ Bukayo Saka after the winger helped England thrash Iran 6-2 with two superb goals in the team’s opening game of the Qatar World Cup.

Jude Bellingham opened the scoring with a header in the 35th minute, before Saka, 21, doubled England’s lead with a superb volley just eight minutes later.

Saka went on to score England’s fourth to grab a brace in the second half with a brilliant solo goal, beating most of the Iranian defence to slot home.

One fan said of his performance: ‘Starboy Saka. He already have more World cup goals than Rooney and Scholes.’

Goals from Raheem Sterling, Marcus Rashford and Jack Grealish helped to seal the game for England, while a goal and a penalty in the 13th minute of extra time from Iranian stirker Mehdi Taremi made the final score 6-2.

Saka could be seen sitting with his family, including his girlfriend Tolami Benson, after England’s record-breaking victory.

Rumours of the relationship between the Arsenal player and 22-year-old Ms Benson began last year when she posted a photo with someone in a mask on Instagram, according to the Sun.

Their romance was uncovered by fans in February when they shared pictures on a yacht in Dubai.

Ms Benson regularly shares pictures in Gunners kit to her 7,000 followers on Instagram, along with frequent snaps on holiday.

Bukayo Saka sits with his family – including his girlfriend Tolami Benson, 22 – after scoring two goals throughout the match

England’s wives and girlfriends were quick to arrive in the Khalifa Stadium to cheer on the team as squad kicked off the first match of the World Cup (pictured: Saka’s girlfriend Tolami Benson)

Much of the praise from fans today has been reserved for Saka after he delivered his best performance in an England shirt yet.

The winger shot to fame on the world stage during the 2020 Euros, being made man of the match in the group stage game against the Czech Republic. He was also chosen to take the fifth penalty for the England team in their final match against Italy.

In September he was named England player of the year for the 2021-2022 season, becoming the first Arsenal player to win the honour.

Rapper and Youtuber KSI praised Saka’s goal by ambitiously predicting: ‘Saka with a top of the league finish to make it 2-0 to England.

‘England ARE winning the World Cup.’

Piers Morgan reacted to Saka’s second goal by saying: ‘BOOOM!! 2-0. What a strike’

An Arsenal fan group praised their club’s young winger by saying: ‘Just an Arsenal boy producing the goods on the world’s biggest stage… Proud of you Bukayo Saka’

Many also hailed Saka’s success as ‘redemption’ for his missed penalty in 2021 which lost England the European Championships final against Italy, and the racist abuse he and other players faced online following the defeat.

‘Saka scores twice in one game. After the disgusting racist abuse they faced last year, it’s great to see them triumphant.’

A fan added: ‘This Saka redemption arc from the Euros is gonna hit so hard…’

One football pundit lavished praise on the Arsenal man, saying: ‘Saka [is] the most complete winger in the game.

Another fan said: ‘Saka’s got that young player of the tournament wrapped up already it’s criminal how Gavi won the Golden Boy trophy over him when you think about it.’