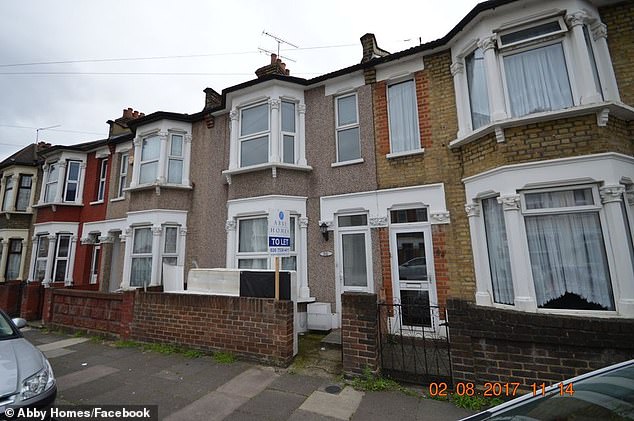 A landlord charging £28,800 in annual rent for his house in a town voted the second worst place to live in Britain in 2014 will only allow tenants with a £72,000 salary.

The Ilford four bed, two bathroom, east London property is up for rent for £2,400-per-month.

But the landlord requires the household’s combined income to be at least £72,000-per-year in order to rent it.

The average salary in the area is around £30,000 and almost four per cent of people living there are unemployed, according to statistics.

In 2014 Ilford was voted the second worst place to live in Britain, and according to a This is Redbridge’s crime table it is one of the most criminally-affected places to live in the borough.

Properties of similar rental properties in Ilford range from £3,900 per month to £2,002.

The description for this home, let by Abby Homes, states: ‘The right tenants should have an annual income of 72k or more to pass referencing.

‘The house has been recently decorated to a high standard and offers you four large bedrooms with lots of light.

The landlord wants tenants who are on a combined salary of £72,000 or more to apply

‘Downstairs you will find a very large reception room leading onto a fully fitted kitchen with all appliances, the main bathroom is downstairs that has been renovated to a high standard.

‘A small conservatory leads onto a quiet and peaceful garden for those days when you want to have a BBQ and relax.’

Pictures show the home is set back on a ropey-looking street, with straggling grass and an outdated pebbledash exterior.

But social media users said the landlord had ‘high standards’.

Another person fumed: ‘Who the f*** gonna pay this money to rent a house? British jokers.’

One person said: ‘High standards and a 72K income. Wow.’

llford residents have bemoaned how some parts of the town have become ‘no-go’ areas.

In September a man was seen ‘screaming’ in one street clutching a stab wound.

And just days ago police were called to a lane in the area to reports of men with knives.

They were unable to find any victims or suspects in the area. Two men, aged 21 and 29, attended a North London hospital later that day suffering from stab wounds.