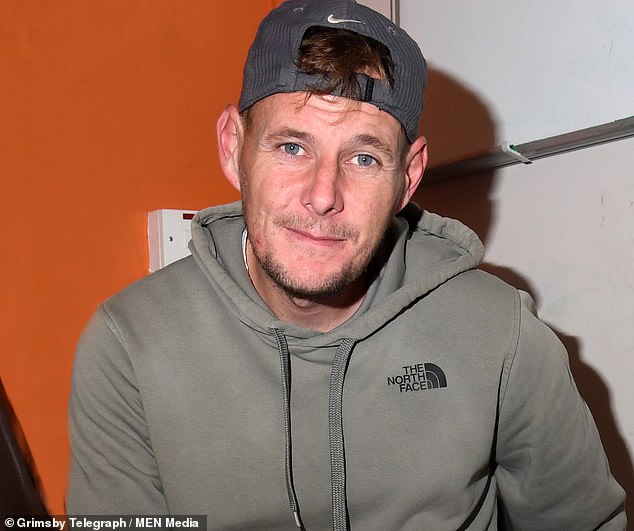 A single dad-of-six is struggling to afford his son’s school shoes due to the cost of living crisis.

Gaz Kaye, from Cleethorpes, who is helping run a Warm Space for others who aren’t able to afford the basic necessities, says even the price of a loaf of bread has gone up and the costs ‘add up’.

And as a result of price increases, he’s had to change the way he lives his life.

He now has to consider every penny he spends and says this is making him feel as though he’s ‘failing’ as a father.

Gaz Kaye, from Cleethorpes, a single dad-of-six, is struggling to afford his son’s school shoes

With his children ranging from aged three and 12, Gaz has a lot of mouths to feed and he works tirelessly to do all he can for them.

He explained: ‘There doesn’t seem to be one specific thing that is really hurting me, it’s just everything.

‘Even just a loaf of bread has gone up, I don’t know how people can make it through the day. Everything adds up but running the car is probably the thing that is the biggest issue.

‘With a big family, I need a big car but a small engine. I’m not poor by any means in my mind, but with the way things are I feel like I probably am right now, but surely it can’t stay like this?’

He added: ‘The last few weeks I’ve realised I’m maybe not as capable of doing what I did. I’m looking at my finances all the time and having to think about every penny I spend.

‘When things started to go wrong, we made sure to book in for Christmas and do all the presents in June.

‘It’s the only way we could have done it but sadly some people will still have all that to sort.

‘The model of how we live our lives has changed and as a father of six I’ve had to change a lot to make it work. That alone massively plays on my mind.’

Only a short while ago, Gaz realised he was unable to afford new school shoes for one of his children which led to them wearing trainers until he could get him new ones.

However, he says he was spoken to by teachers who asked him to purchase his son’s shoes. He explained: ‘As a single father, I’m not always able to do that straight away. Things like this make me feel like I’m just failing as a father.

‘It’s even come to the point where my child wanted some new trainers and rather than buy them new I had to buy them on Facebook Marketplace.’

With the current state of things, Gaz’s biggest worry is how life will be for his children in the coming years.

He said: ‘Kids can’t seem to have anything these days, bar the basics, because of what life is costing. I know people who are selling laptops just to feed their children.

‘It’s getting worse and worse the longer it goes on – and if it’s this bad now, what will it be like in ten years’ time for my children?

‘It’s so frustrating that we can turn a light bulb on from the other side of the world or send people to space but we can’t feed our kids.

‘We’re in a system that isn’t working. A cost of living payment is great, but it just shouldn’t be a thing.  Getting what are in effect handouts makes people feel awful and it’s scary to wonder how long this might go on for.

‘I can’t carry on like this but there doesn’t seem to be any change in sight and that is really upsetting.’