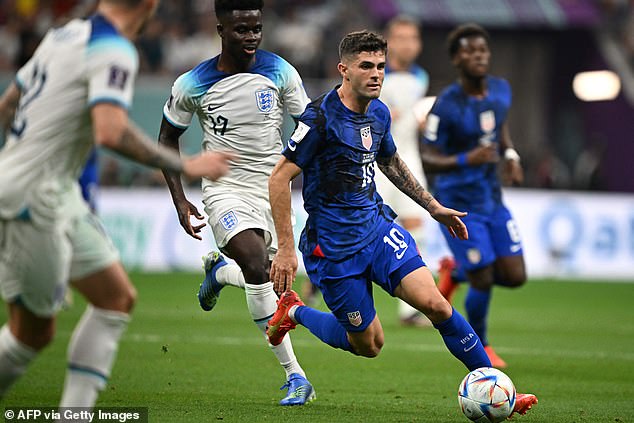 America holds its breath as Team USA DOMINATES England in first half in Qatar… as the Red, White and Blue aims to stay UNDEFEATED against the Three Lions in World Cup play

Maybe it is called ‘soccer’ after all.

The United States national soccer team has stunned the England national football team by playing to a 0-0 first-half draw in Group B play at the World Cup in Qatar on Friday.

The US had several chances to take the lead over the first 45 minutes of play, including a Christian Pulisic shot from the box that ricocheted off the cross bar and a Weston McKennie that missed the goal entirely. Likewise, England has had its own chances, including an early opportunity that English captain Harry Kane failed to convert in the 10th minute.

With many Americans enjoying a day off following Thanksgiving, there was plenty of time to watch the US square off with England in Group B

Of course, the US has never lost to England in the World Cup, tying with the Three Lions in group play at the 2010 tournament in South Africa and famously beating the English, 1-0, in the group stage of the 1950 Cup in Brazil.

England, however, does hold an 8-2-1 record against USMNT all-time, but that includes nine exhibitions, including their last meeting – a 3-0 pounding of the Americans in London in 2018.

Unfortunately for the US, as encouraging as the first half has been, a draw against England won’t be good enough to advance to the knockout stage, due to a disappointing

Iran’s stunning 2-0 win over Wales earlier Friday wasn’t good news for the United States in Group B, but the Red, White, and Blue still has a chance at advancing to the World Cup knockout stage in Qatar, regardless of Friday’s outcome against England.

Following a disappointing 1-1 draw with Wales in the Group B opener on Monday, the US is now set for its second game of the World Cup against England at Al Bayt Stadium in Al Khor, and a victory over Gareth Southgate’s team will make the route to the last 16 much, much simpler.

That said, if coach Gregg Berhalter’s team loses to England – one of the tournament favorites coming off a 6-2 win over Iran – the US can still advance by beating the Iranians in the Group B finale on Tuesday.

Interestingly, a draw against England won’t change that equation because the US would still have only two points, necessitating a win over Iran on Tuesday in order to advance.

Of course, a win over the Three Lions makes things a lot easier for the US, which could then advance with a win or a tie against Iran on Tuesday. And even if the US somehow loses to Iran after beating England – an unlikely series of events, to say the least – the Americans could still advance on goal differential if Wales were to tie or beat England on Tuesday.

Long story short: the US almost certainly needs to beat Iran on Tuesday to advance, regardless of Friday’s outcome against England.