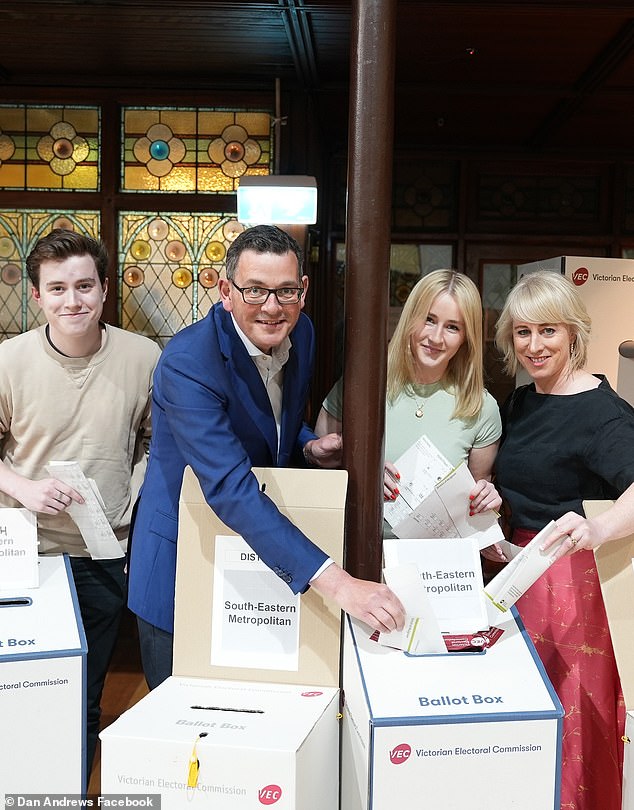 Victorian Premier Daniel Andrews has been publicly accused of photoshopping a symbolic ‘exit’ sign out of a photo showing him voting early with his family.

But graphic design experts have questioned the claims, which were levelled on Twitter by former Liberal premier Jeff Kennett on Friday.

Mr Kennett tweeted an image of Mr Andrews and his family casting his ballot, saying: ‘Look who airbrushed out the exit sign when they privately voted and then posted their voting on social media.

‘Not only did he not have the courage to vote with his constituents, they falsified the picture. Says everything does it not? Certainly on the way out!’

The photo shows Premier Dan Andrews voting alongside his family (pictured) at a polling booth on Thursday outside his electorate.  But some critics are claiming a green emergency exit sign behind the premier had been ‘airbrushed’ out of the photo

However, a graphic design expert suggested to the Daily Mail Australia that all may not be as it seems.

‘In our opinion Dan Andrews hasn’t photoshopped the exit sign out – the photographer’s flash has blown out all the white,’ she said.

Mr Andrews shared the picture of him voting early in the Melbourne CBD on Thursday – rather than in Mulgrave, the seat in the city’s south-east he represents.

Mr Andrews was called out for voting early by Mr Kennett – who slammed it as an ‘insult’ to his constituents that he failed to ‘have the decency’ to vote in his seat.

But the premier fired back at Mr Kennett at a press conference on Friday.

Meanwhile, his opponent independent Ian Cook is mounting a strong challenge in the seat. Mr Andrews said he is simply too busy to vote in his own electorate on Election Day.

‘Like so many other Victorians, we’ve got a few things happening on Saturday so we voted early and on the way to somewhere else.’

Labor is forecast to lose a dozen seats at the weekend – which could lead the party to rely on the Greens to cling to power.

Meanwhile, other signs showing Mr Andrews could be driven out of government came out as his own constituents in the traditional Labor stronghold turned out in force to support his independent rival on Thursday

Daily Mail Australia spoke to dozens of constituents in Andrews’ traditional Labor stronghold on Thursday who are voting for his independent rival.

Not a single person questioned was voting for Mr Andrews.

Between 1-3pm, Daily Mail Australia spoke to a random selection of 35 people, of all ages, genders and backgrounds, as they darted in and around of the Noble Park North voting centre.

One of the voters, librarian Tracy Jenkins, said she had always voted for Mr Andrews until now.

‘I haven’t gone for him this time. I normally do, but I believe there is a strong presence here of another independent. Mr Cook. I met him today and I’m impressed,’ she said.