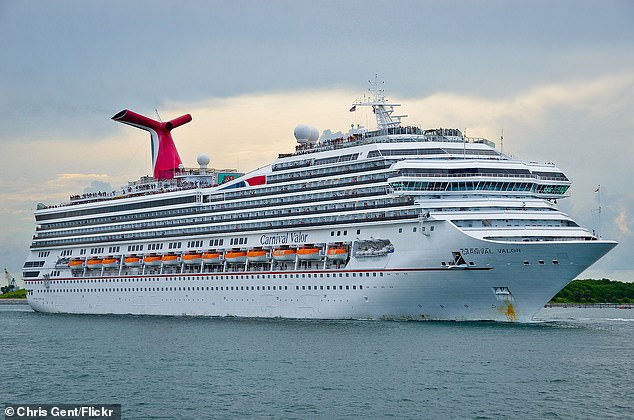 A missing Carnival Cruise passenger has been found alive in the Gulf of Mexico after falling overboard following a night of drinking and could have been in the water for over 15 hours.

The male passenger, 28, whose identity has not been disclosed, was rescued by the US Coast Guard (USCG) on Thanksgiving Day after going missing on the journey from New Orleans to Cozumel, Mexico.

He was last seen at the Carnival Valor’s bar with his sister before he left to use the restroom at around 11pm Wednesday and did not return. His sister waited until noon the next day to report him missing, according to KPLC 7.

The ship was thoroughly searched, but he was nowhere to be found. Crews called the Coast Guard around 2.30pm.

‘We have not been able to confirm when he entered the water, so we’re under the assumption [that] any point from Wednesday on, he could have entered the waterway,’ Lieutenant Seth Gross, of the USCG New Orleans branch, told CNN.

‘He realistically could have been in the water for 15+ hours before we were able to successfully rescue him.’

The ship had backtracked toward New Orleans to support the US Coast Guard, before returning on its path to Cozumel, Mexico, after being released from the search.

The man was spotted by another vessel and picked up by helicopter roughly 20 miles south of the Southwest Pass in Louisiana at 8.25pm.

He was found in a responsive state and taken back to New Orleans for treatment, USCG Petty Officer Ryan Graves told CNN. He is in stable condition, according to Gross, and is being treated at a hospital.

The male passenger was found in the Gulf of Mexico on Thanksgiving Day after going missing from the Carnival Valor (pictured in September). He was last seen at the bar with his sister before he left to use the restroom around 11pm and did not return. His sister waited until noon the next day to report him missing

Wednesday 11pm: The man is last seen at the bar with his sister

Unspecific time: Ship is released from search by the Coast Guard

8.25pm: Spotting by another vessel and rescued by the Coast Guard via helicopter

It is unclear how long he spent in the sea. The temperature of the water near New Orleans is about 70 degrees.

Gross said the rescue mission was complicated ‘given the time difference from when he was last seen to when the Coast Guard received notification.’

They sent out an emergency message to all mariners in the Gulf and ‘launched all available resources,’ which included a small boat, helicopter, and airplanes that covered 200 miles of an ‘active search’ area.

Carnival provided support to his family while he was missing. His family remains onboard the cruise ship and Gross said he spoke with them.

Throughout his 17-year career, Gross said this mission was ‘unlike anything I’ve been apart of.’

‘I think this blows normalcy out of the water here,’ Gross told the outlet. ‘The will to live is something you have to account for in every search and rescue case.

‘This is one of the absolutely longest I’ve heard about and one of those Thanksgiving miracles.’

Mike Anderson, who was a passenger on the ship, said he saw cruise staff searching for the man and heard announcements about a missing person.

‘[I] noticed security starting to search the boat with a photo of the missing [passenger] in their phones,’ he told CNN.

Carnival told DailyMail.com in a statement on Friday: ‘We greatly appreciate the efforts of all, most especially the US Coast Guard and the mariner who spotted the guest in the water.’

The ship will sail to Progreso, on Mexico’s Yucatan Peninsula, before returning to the States on Monday.

The five-day cruise started in New Orleans before arriving in Cozumel by day three. The next day passengers visit another port before returning to Louisiana.

Lieutenant Seth Gross said the time between when the man went missing and when he was reported missing made the search complicated as the ship had moved a lot. ‘Time was paramount,’ he said. He said this was ‘one of the absolutely longest [times] I’ve heard about’

Earlier this year, a woman, 32, jumped overboard after breaking away from security.

Footage shows three security guards on the Carnival Valor holding the frantic woman’s arms behind her back. She was not handcuffed, despite prior claims from passengers.

She was heard screaming out the name ‘Alicia’ as the guards helped her up a flight of stairs and off of the pool deck after an alleged hot tub incident.

Shortly after being escorted off the deck, the 32-year-old woman allegedly broke free from the guards and jumped off the tenth floor of the ship and into the ocean.

Earlier this year, a woman, 32, (pictured) jumped overboard after breaking away from security

Shortly after being escorted off the deck, the 32-year-old woman allegedly broke free from the guards and jumped off the tenth floor of the ship and into the ocean.  A passenger claimed they saw ‘blood and jerking motions’ after she went overboard

Her leap was not shown in the video, but passengers told Fox 8 that she hit the side of the boat before hitting the water face first.

Shocked passengers are seen rushing to the edge of ship as crew tossed life preservers and flares to mark her position in the water. The passengers claim the woman disappeared soon after.

A passenger claimed they saw ‘blood and jerking motions’ after she went overboard.