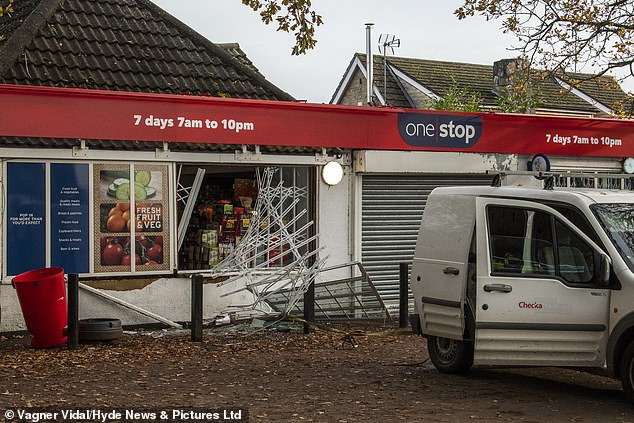 By James Callery For Mailonline

Ram-raiders made so much noise during a burglary at a convenience shop in the village of Finchampstead in Berkshire that they awoke the neighbours before being arrested at the scene.

Several people living nearby called the police after overhearing a van being used to pull out a window and security bars at the One Stop shop on Wednesday.

Pictures show the extensive damage caused before the stolen van was impounded at the scene.

The thieves smashed a large window before attaching ropes around the frame and using a white Checkatrade van to yank it out of the shop front.

A huge amount of damage was caused to the One Stop shop in Barkham Ride after thieves yanked out the window frame with a van. The culprits are two men aged 27 and 30

A spokesman for Thames Valley Police said on Thursday evening: ‘At around 11.47pm on Wednesday officers were called by a number of members of the public to a shop in Barkham Ride, with reports suggesting offenders were trying to gain access to the shop using a van.

‘Officers attended and arrested two men, aged 27 years and 30 years, who were both from Surrey. They were detained on suspicion of burglary and remain in custody at this time.

‘An investigation is ongoing.’

Police were tipped off by neighbours. They arrived in time to make arrests on the spot. The shop has been targeted by burglars several times before

Passers-by said the shop had been ransacked as the thieves searched for cigarettes and bottles of spirits.

The same shop had been ram-raided and burgled on a number of previous occasions but it was believed to be the first time raiders had been arrested while carrying out the crime at the store.