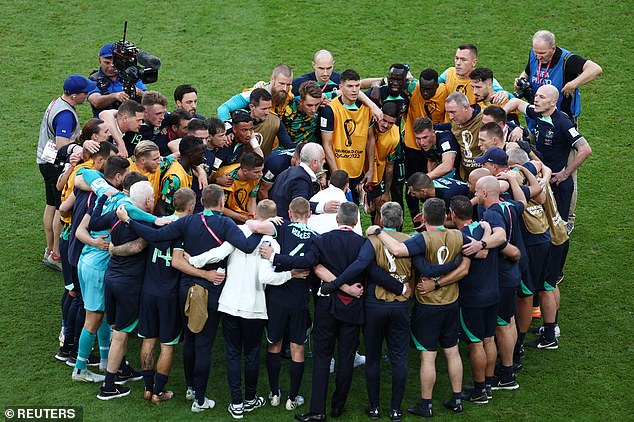 A stunning header from Mitch Duke and a stoic defensive effort at the back ensured Australia picked up their first World Cup win in 12 years and puts their World Cup future firmly in their hands ahead of Denmark’s game against France.

Arnold had expressed frustration with the clear gulf in quality between his squad and their competition after their defeat to the reigning world champions.

His players once again punched above their weight in Al-Wakrah but with a different outcome, clinching all three points in a result that will be remembered for years Down Under.

After the game, Arnold gathered his players in a huddle and invited injured Martin Boyle into the centre as he delivered a fired-up message.

Boyle, who has been ruled out of the competition with a knee injury, was sporting crutches as the emotional boss spoke to his players.

After the game, Arnold could barely hide his pride in his team for their gladiatorial effort.

‘I’m just hugely proud of the boys, they showed that great fighting Aussie spirit tonight,’ he said. ‘I expect we made the nation very proud.

‘The other night we played against the world champions and the boys had the same effort level.

‘When the doubters hate us, bring it on. I said to the boys after the game it was the best friendly we could ever have, a lot of those mistakes were removed tonight and I couldn’t be prouder of the boys.

‘Now we move forward, yes we achieved one thing but it’s nothing, there is more to do.’