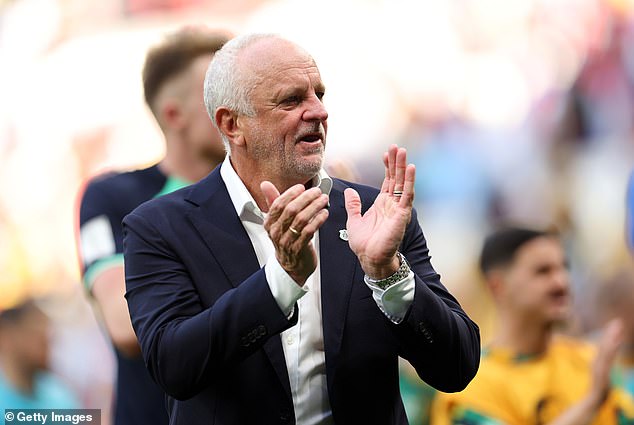 Australia are on the verge of emulating the class of 2006 as they stand 90 minutes away from reaching the knockout stage of a World Cup for the first time in 16 years after beating Tunisia 1-0 on Saturday.

A draw against Denmark will be enough for Graham Arnold’s men to progress and become only the second Socceroos side in history to reach the Round of 16 at the tournament.

After a 4-1 drubbing at the hands of France in the opening game, Mitchell Duke’s header was the difference against Tunisia as Australia ended a 12-year wait for a World Cup win.

The Socceroos arrive into Wednesday’s game with destiny firmly in their hands, while Denmark must win if they are to join defending champions France in the knockout stages.

Ranked No10 in the world, the Danes were held to a stalemate draw by Tunisia and lost 2-1 to a Kylian Mbappe-inspired Les Bleus, a result which left them trailing Australia by a point.

So, with the clash quickly approaching, Sportsmail takes you through everything you need to know below about the opening game of the 2022 World Cup.

When is Australia vs Denmark?

Australia take on Denmark on Wednesday 30 November, with the game kicking off in the early hours of Thursday Down Under.

How to watch the match

The game between Australia and Denmark will be aired live on BBC Two for UK viewers. If you are looking to stream the game, you can head to BBC iPlayer of the BBC Sport website.

The game will be free to watch for all UK viewers with a TV Licence. Meanwhile, there are plenty of channels broadcasting the game in the US, including Fox Sports 1 in English and Telemundo in Spanish.

Australian viewers can tune into the game via SBS, who will be televising every match during the 2022 World Cup. SBS On Demand will also stream the Australia vs Denmark fixture for those on the move.

AUS: SBS and SBS On Demand

Where is Australia vs Denmark being played?

Australia’s fixture against Denmark will take place at the Al Janoub Stadium – which is located in Al-Wakrah, 17km south of Doha.

The Al Janoub Stadium was designed by Iraqi-British architect Zaha Hadid and has a capacity of 40,000, including a retractable roof.

The stadium will host games from Groups D, G and H, as well as one Round of 16 clash. Both of Australia’s first two games at this World Cup have been played at this venue.

France top Group D with six points have already qualified for the Round of 16 after beating Denmark 2-1 on Saturday, while Australia’s 1-0 win over Tunisia put the Socceroos in second place.

Denmark are third with two points, with Tunisia bottom of the group heading into the final round of games with one point.

That means Australia will join France in the knockout stage as long as they avoid defeat against Denmark, while the Danes must beat Graham Arnold’s men to progress.

Tunisia, meanwhile, can still qualify but their destiny is out of their hands. The Carthage Eagles must beat France and hope Australia draw with Denmark, which would see them overtake the Socceroos on goal difference.

A win against France would also be enough for Tunisia, as long as Denmark beat Australia by a smaller margin.

The Socceroos were forced into a change ahead of the game against Tunisia with Nathaniel Atkinson missing the game with an ankle injury he picked up against France.

Fran Karacic replaced the Hearts defender at right-back and is expected to keep his place for the game against the Danes, but Graham Arnold doesn’t have any other injury concerns and he’s unlikely to rotate the side that beat Tunisia.

Denmark came through the game against France unscathed on the injury front, given Kasper Hjulmand a full squad to choose from. The Danes have lined up in a 3-4-2-1 against both Tunisia and France, but Hjulmand may opt to switch formation as his team needs a win to go through.

Australia and Denmark were drawn together in the same World Cup group four years ago, drawing 1-1 in their second match as Mile Jedinak’s penalty cancelled out Christian Eriksen’s opener.

The only three other meetings came in friendlies, with Denmark winning 3-1 in London in 2007 and 2-0 in Copenhagen five years later. The Socceroos’ only win came in South Africa in 2010, with Josh Kennedy scoring in a 1-0 victory ahead of the 2010 World Cup.