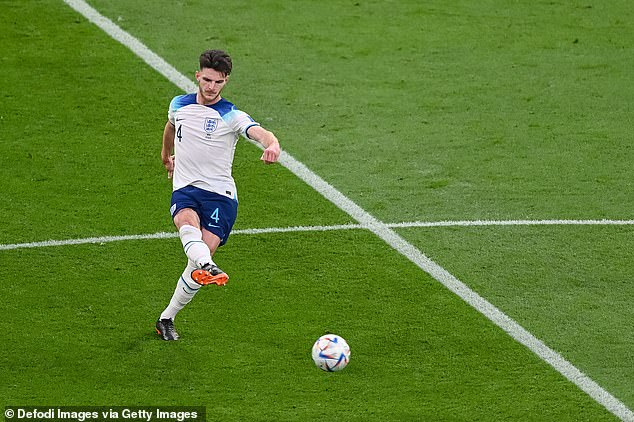 Grame Souness has given a glowing review of England midfielder Declan Rice, but called out the West Ham captain for not scoring enough goals from midfield at club or international level.

The 23-year-old defensive star has been a reliable figure in the Three Lions engine room with skipper Harry Kane the only player to make more appearances than Rice since he made his debut in 2019.

Rice has cemented his place amongst England’s midfield ranks, playing every minute of their World Cup campaign so far and is expected to continue his run with a 37th cap against Wales on Tuesday.

But despite emerging as one of the Premier League’s brightest prospects in recent seasons, his goalscoring feats leave much to the imagination with Souness calling on Rice to find the back of the net more often given the exceptional playing surfaces in the modern game.

‘There is a hell of a lot to like about him, exceptionally energetic, covers the ground for fun, a great defensive head, senses danger, he has evolved to be a main man in this England team.

‘Downside is he has played 182 games in Premier League and seven goals, a goal every 26 games, that isn’t enough whether you call yourself a holding midfield player or defensive midfield player.

‘Given the surfaces in the Premier League, when I played the ball bobbled all over the place, very different surface to now, he should get more goals coming onto things. That’s an obvious criticism.

Souness scored 68 goals during a hugely successful career in England’s top-flight as he lifted numerous first division titles alongside the European cup.

As one of yesteryear’s most creative and industrial midfield players, Souness commented on England’s current crop of midfield stars as he stressed players are being too cautious when in possession.

Hinting that the Three Lions would be better off with a solitary holding midfielder, Souness added: ‘I just think England are overcautious in midfield, Jordan Henderson is another sitting midfielder, that’s why when you watch England it can be not very exciting.

‘They now have players in midfield that can make them a better watch, that will be easier on the eye and still as solid.

‘At this moment in time with no Kyle Walker, Harry Maguire and his season, maybe to go with two holding midfielders against Wales I’m not so sure.’