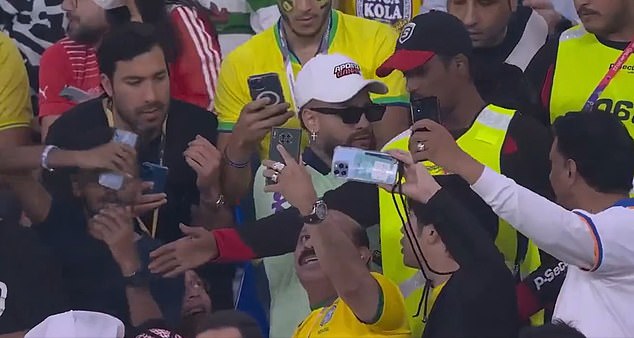 Fake Neymar strikes again: Impersonator who tricked FOX Sports into believing he was the real deal is spotted in the stands taking selfies with fans during Brazil’s win over Switzerland (while the player himself watched on TV!)

An extremely convincing Neymar impersonator was spotted at the World Cup in Qatar once again – this time actually at one of Brazil’s games.

The impersonator was caught on camera in the stands during halftime of Brazil’s win in its second Group G game against Switzerland Monday.

Fans clamored around him and he even appeared to be escorted by security staff in yellow bibs and lanyards.

Spectators were quick to whip out their phones to take photos, thinking they were getting up close and personal with the soccer star. The fake Neymar even stopped to take a selfie with some.

Photo agencies were even duped into thinking they had captured the forward as they sent around photos of the impersonator, captioning them as, ‘Brazilian football player Neymar.’

The real Neymar wasn’t on the pitch as he is facing a battle to play in the World Cup again after hurting his ankle in Brazil’s opener after a heavy tackle by Serbia defender Nikola Milenkovic.

Fans were quick to whipped out their phones to take photos, with one even taking a selfie

In fact, he wasn’t anywhere near the Stadium 974 as he continues his recovery. He posted a photo to his Instagram story of his foot, wrapped in a compression boot, propped up on a bed with a television screen in the background showing his teammates singing the Brazilian national anthem before the game kicked off. He wrote, ‘Boraaaa,’ which translates to, ‘Let’s go.’

He was seen in tears as he hobbled around the Brazil bench during Brazil’s opener and was treated with ice packs.

He is not expected to play in Brazil’s last group games, against Cameroon either.

The 30-year-old shared a picture on his Instagram on Saturday showing that his ankle was still swollen.

This isn’t the first time the fake Neymar has struck either. He previously duped FOX Sports last week.

The broadcaster tweeted a clip of the iconic Brazil striker – who was reduced to tears when a challenge in the 2-0 win over Serbia injured his ankle – walking around Doha and being mobbed by fans.

‘Neymar walking around Doha,’ FOX wrote on Twitter with the accompanying footage, where ‘Neymar’ appeared to be escorted through a crowd by a member of the Brazil entourage, decked in team gear.

Except it of course wasn’t Neymar, which a number of soccer fans jumped onto the tweet to point out.

And in fairness to FOX, it saw the funny side. ‘UPDATE: we got got,’ it wrote. ‘Neymar has a very convincing doppelganger’ alongside some crying with laughter emojis.

Fox also poked fun at itself after the latest sighting of the fake Neymar, posting the clip of the impersonator at the game with the captions: ‘Oh look, there’s Neymar definitely in the stands for the Brazil game.’

A Selecao booked its spot in the last 16 with a 1-0 win over Switzerland after Casemiro found the back of the net in the second half.