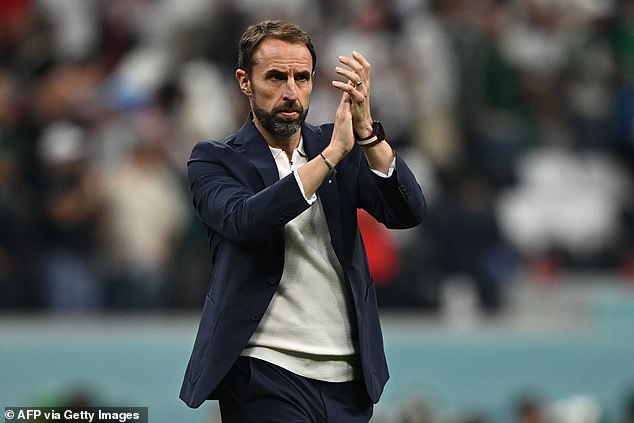 CONFIRMED: England will play Senegal in the last 16 if they win Group B tonight, and Holland if they finish as runners-up… with Gareth Southgate’s side set to go through barring a humiliating defeat to Wales

By Matt Davies For Mailonline

England head into tonight’s crunch clash against Wales knowing exactly who they will play against in the last 16 by finishing either as Group B winners or as runners-up.

The Three Lions are all-but through to the knockouts following their 6-2 win over Iran and 0-0 draw with USA, needing to avoid a 4-0 defeat against Wales to reach the Round of 16.

What remains uncertain is where England will finish in Group B, with all four teams still able to top the group. What is clear, though, is that the Group B winner will play Senegal in the last 16, while the runner-up will play Holland.

The conclusion of Group B will quickly follow that of Group A, in which Holland secured top-spot with a routine victory over Qatar, with Senegal holding off Ecuador to finish in second.

England are currently in top spot, with Iran in second, USA in third and Wales in fourth. Qatar, with three losses from three matches, finished Group A in fourth, with Ecuador in third, Senegal in second and Holland first.

Should England progress as group winners, which they would guarantee with a win over Wales, they will play Senegal on December 4 at the Al Bayt Stadium, with kick-off at 7pm.

But if England are to suffer disappointment against Wales, finishing Group B as runners-up, they will play Holland on December 3 at the Khalifa International Stadium, with kick-off at 3pm.

England are currently top of Group B, with Iran in second, USA in third and Wales in fourth

Despite the minor risk of an unthinkable early exit, England manager Gareth Southgate is expected to switch up his side from the one that started both games against Iran and USA.

Phil Foden and Marcus Rashford are expected to come into the side, with Kyle Walker and Jordan Henderson also set to make their first starts of the tournament.

There had been talk of a demotion to the bench for 19-year-old starlet Jude Bellingham, but the Borussia Dortmund man is expected to keep his place in midfield alongside Henderson and Declan Rice.

But with the knockout stages likely to come, Southgate has made clear to his players that any omissions from the starting XI should be viewed as rotation rather than anything more concrete.

The England staff have told their players that they intend to use the depths of the squad to combat the quick turnaround in matches and the stifling conditions in Qatar.