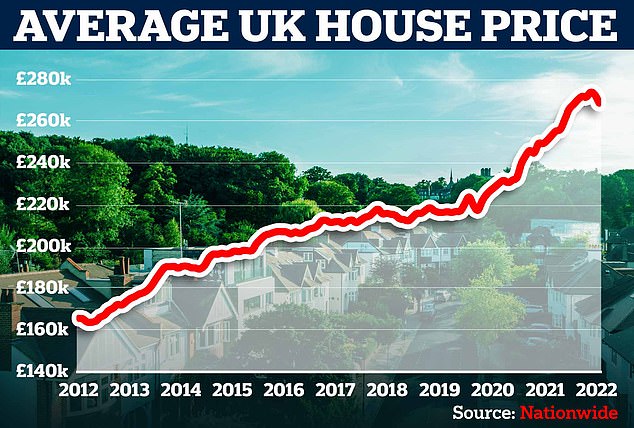 The average house price fell by 1.4 per cent month on month in November, marking the biggest drop since June 2020, according to an index.

November’s drop followed a 0.9 per cent month-on-month fall in October.

Across the UK, annual house price growth slowed sharply to 4.4 per cent, from 7.2 per cent annual growth recorded in October.

The average house price in October was £268,282 but this fell by nearly £4,500 this month, down to £263,788 in November, Nationwide Building Society said. The lender previously warned that house prices could fall as much as 30 per cent next year.

Mortgage rates jumped following the mini-budget in September, with Bank of England base rate rises also pushing up borrowing costs, against a backdrop of households being squeezed by rising bills generally.

Nationwide had revealed this week that house prices fell by 0.9 per cent month-on-month for the first time in 15 months in October and the sharpest drop since the start of the pandemic

House prices could fall by up to 30 per cent in the worst case scenario, a mortgage lender has warned

Last month, MailOnline reported demand for new homes have fallen by a third since the widely criticised September mini-budget. The budget saw two and five-year fixed-rate mortgage rates surpass 6 per cent for the first time since 2008.

Robert Gardner, Nationwide’s chief economist, said: ‘The fallout from the mini-budget continued to impact the market, with November seeing a sharp slowdown in annual house price growth to 4.4 per cent, from 7.2 per cent in October.

‘Prices fell by 1.4 per cent month on month, after taking account of seasonal effects – the largest fall since June 2020.

‘While financial market conditions have stabilised, interest rates for new mortgages remain elevated and the market has lost a significant degree of momentum.

‘Housing affordability for potential buyers and home-movers has become much more stretched at a time when household finances are already under pressure from high inflation.

‘The market looks set to remain subdued in the coming quarters. Inflation is set to remain high for some time and bank rate is likely to rise further as the Bank of England seeks to ensure demand in the economy slows to relieve domestic price pressures.

The average UK house is now worth £282,788, according to Nationwide Building Society – the lowest since June 2022

‘The outlook is uncertain, and much will depend on how the broader economy performs, but a relatively soft landing is still possible.’

Some mortgage products have returned to the market in recent months, after more than 1,600 of them were canned following the mini-budget.

‘Given the weak growth outlook, labour market conditions are likely to soften, but they are starting from a robust position with unemployment still near 50-year lows,’ he said.

‘Moreover, household balance sheets remain in good shape, with significant protection from higher borrowing costs, at least for a period, with around 85% of mortgage balances on fixed interest rates.

‘Stretched housing affordability is also a reflection of underlying supply constraints, which should provide some support for prices.’

Tom Bill, head of UK residential research at estate agent Knight Frank, said: ‘The impact of the mini-budget continued to reverberate in November, with the largest monthly fall in house prices since the early days of the pandemic.’

He continued: ‘Mortgage rates should keep edging downwards as the effects of the mini-budget wash through the system, which should settle the nerves of buyers and sellers, even as a 13-year period of ultra-low borrowing costs comes to an end.

‘We expect house prices to fall by 10 per cent over the next two years and the reality of higher rates will bite more after Christmas. Mortgage offers made before the mini-budget will begin to lapse and increase downwards pressure on prices from 2023.’

Jeremy Leaf, a north London estate agent and a former residential chairman of the Royal Institution of Chartered Surveyors (Rics), said: ‘Prices are softening but could have fallen further were it not for those two stalwarts, shortage of supply and strong employment, despite continuing concerns over the rising cost of living and particularly mortgage repayments.

‘The problem is not existing sales, the overwhelming majority of which are proceeding, but new business. However, some buyers are returning now that mortgage rates are beginning to fall but they are more aware of their stronger position so are negotiating hard.’

Nicky Stevenson, managing director at estate agent group Fine & Country, said: ‘While a further cooling of prices is expected over the winter, this effect may be mitigated in part by the return of stability to lending markets and more realistic pricing of loans.’

Gabriella Dickens, a senior UK economist at Pantheon Macroeconomics. said: ‘All told, we expect a peak-to-trough fall in house prices of around 8%, reversing around one-third of the increase since the start of the pandemic.’