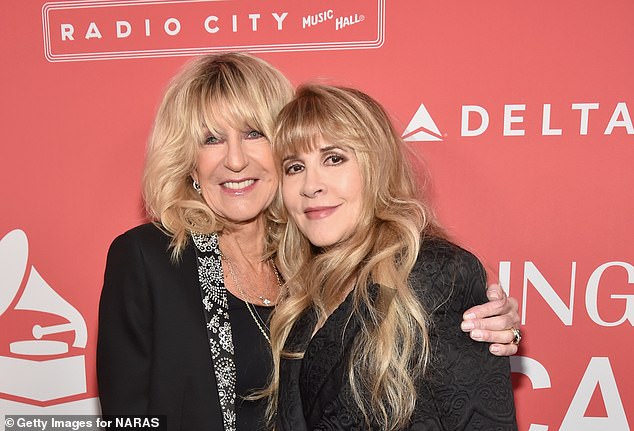 Fleetwood Mac provided the soundtrack to my life… and love, writes ALEXANDRA SHULMAN

By Alexandra Shulman for the Daily Mail

The year was 1975 and, then 17, I was hanging out in my older cousin Larry’s bedroom in his house at the foot of Laurel Canyon in Los Angeles. Larry, with his Zapata moustache, was puffing on a bong and I was sitting on his bed, entranced by the captivating voice of Christine McVie, in the band I had just discovered — Fleetwood Mac.

This was when they were still a slightly under-the-radar British group, who had hit LA and were taken up by those in the know. Christine was the only woman — a bluesy singer with a page-boy haircut and aviator specs, whose husky voice resonated with emotion, painful love and good times.

She was the woman that anyone who was serious about their music knew was the real deal.

When the American duo Stevie Nicks and her lover Lindsey Buckingham joined Christine, her husband John McVie and Mick Fleetwood, the band changed, but Christine remained the same. Christine McVie is pictured above with Stevie Nicks

While there were other fabulous female singer-songwriters — Carly Simon, Joni Mitchell and Carole King — Christine was different. She was part of a rock band, holding her own in a world dominated by guitar-licking men.

When the American duo Stevie Nicks and her lover Lindsey Buckingham joined Christine, her husband John McVie and Mick Fleetwood, the band changed, but Christine remained the same.

Stevie Nicks conjured up mystical characters like Rhiannon — immortalised in the song — the kind of fantastic creature that girls like me in our vintage Hawaiian shirts and army surplus jackets wanted to be, adored by all men and trapped by none. As Stevie whirled around, a nymph in satin dominating the stage, Christine stood at the back on the keyboards, keeping the heart of the band beating. A strong woman. We wanted to be that, too.

By 1977, the year Rumours was released, I was on an American gap year, travelling coast to coast on Greyhound buses with my friend Alyson. That album was the soundtrack to the trip.

From our starting point in New York’s Greenwich Village to our final destination in Beverly Hills, we fed jukeboxes with coins across the country as we listened to tracks like Dreams, Gold Dust Woman and Songbird, all the songs that the two women sang.

When we found ourselves in some less-than-pleasant situations — the cockroach-infested room in Atlanta, the very dodgy dive bar in New Orleans — it was Stevie and Christine’s vocals that reminded us we were living life and having the kind of experiences the women in their songs would take in their stride. Well, that’s what we thought.

Many years later, after the band had split up, they reunited for a tour in 2003. I had never seen them play live and, although I was apprehensive about whether the music would still have the resonance of my youth, I bought two tickets for the Earl’s Court show.

I took a date with me, an old friend who I thought might understand what Fleetwood Mac had meant to me all that time ago. It was a great evening. He loved the show as much as I did. We’ve now been living together for 18 years.