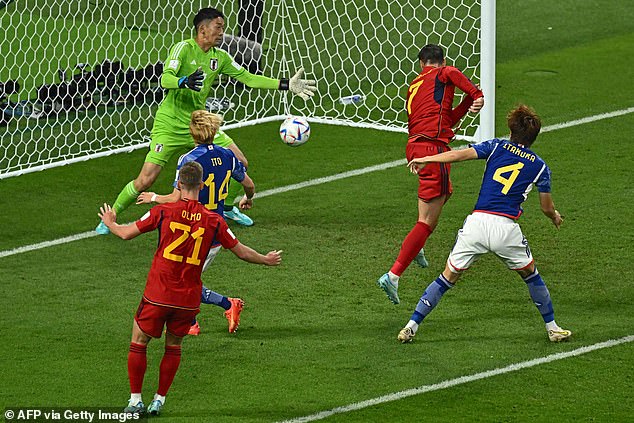 By Michael Pavitt For Mailonline

Morata head Spain into a 12th minute lead against Japan in Group E, converting Cesar Azpilicueta’s cross from inside the six-yard box.

The 30-year-old became just the second Spaniard to score in his first three World Cup appearances, after Telmo Zarra in 1950.

‘That’s how you do it,’ the former Scotland international said. ‘Position yourself between the centre backs. For all their great football that’s a bread and butter goal.

‘A cross, the centre forward finds a gap and gets in front, and the delivery is spot on.’

ITV pundit Eni Aluko claimed Morata was being rewarded for his discipline in holding his position, rather than opting to become involved in build-up play.

‘Three goals in three games and he just looks sharp, he looks confident,’ Aluko said. This guy is a goalscorer, he’s got a lot of experience he’s done it at big clubs.

‘He’s just a box player he’s not looking to get too involved in possession, he knows how to score goals he gets in front of the front post he stays in-between defenders, he’s an out-and-out goalscorer.

‘So many number nines in a possession team, there’s a temptation to drop deep but he stays high and keeps the defenders honest and that’s how he gets his goals.

‘He gets his goals in the box, when the ball drops down he shoots quickly,’ Aluko added. ‘He’s disciplined in holding his position, it’s a great goal but that goal has come from his positioning.

‘When you see Spain building up he just stays high, he’s not interested – there’s so many false nines now in the modern game, Harry Kane drops deep to get involved, Morata will stay high and he gets his goals in the box.’

Morata moves level with France’s Kylian Mbappe in the golden boot race, with the pair scoring three goals and providing one assist.

Morata has now scored 30 goals in his 60 caps for Spain.

The 2010 World Cup winners would secure top spot in Group E with victory over Japan.