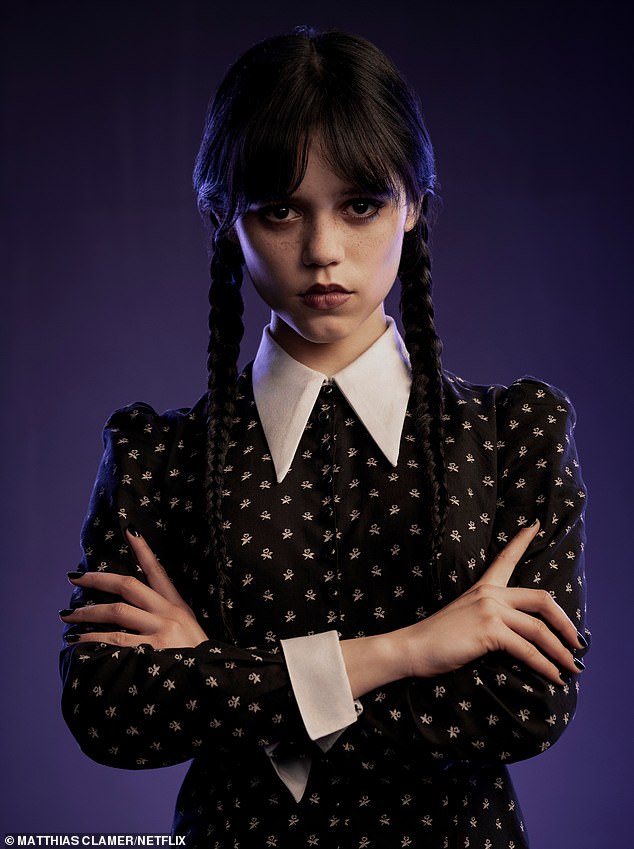 The portrayals led to a frenzy on social media, alleging that the show is racist for starring black actors as villains.

Another Twitter use with the handle Luffyslover said she was glad the show stars a Latina, but condemned the portrayal of the black characters.

‘Don’t get me wrong…I love Jenna Ortega and that she’s playing Wednesday but one thing I hate about this show is that why did they make ALL the black people in this show terrible people,’ the disgruntled Twitter user wrote. ‘Like how did Netflix see nothing wrong with this? I hate Tim Burton’s racist self.’

A Twitter user with the handle Shinyfluff echoed the criticism, tweeting: ‘Why is the the Black girl in Wednesday’s school an aggressive bully tho? hmmm tim burton is a known racist….. no surprises there…..’

Another Twitter user with the handle Zoinks, said they wouldn’t even give the show a chance because of Burton.

‘Was excited for the Wednesday Adams show until I found out Tim Burton directed it :/ we can’t just have nice things, racists always have to stick their grubby little hands in everything.’

Not everyone was so convinced that having black bullies in the show made it racist, with many nothing that the characters themselves change throughout the series.

Many of social media labeled Tim Burton’s hit Netflix series Wednesday as racist for casting black actors as bullies and owners of a pilgrim-themed attraction. The show, which topped Stanger Things in views, stars Latina Actress Jenna Ortega as the titular Wednesday Addams

Walker, is also notably the son of the corrupt mayor who owns Pilgrim World, a museum and theme park celebrating colonizers

The backlash on social media stemmed from Burton’s past comments regarding diversity on screen, where the director said he didn’t want to force inclusivity on his sets.

Samuel L. Jackson had suggested in 2016 that he was the first black lead in one of Burton’s movie when he starred in Miss Peregrine’s Home for Peculiar Children.

Prior to Jackson, black voice actor Ken Page had played Oogie Boogey in the 1993 classic, A Nightmare Before Christmas.

Others on social media, however, noted that the black characters become more than just bullies and that the show still stars white people as the lead villains

Twitter user Erin noted this very criticism of the argument, asking if the backlash only came from people who watched the first few episodes.

‘They all have redemption arcs,’ Erin wrote about the bullies. ‘Did they not watch the whole thing???? I’m really confused cuz they had the best character development out of the whole cast imo Wednesday included.’

Like many others on Twitter, Sydney Watson noted that while the two lead bullies were black, ‘the three primary antagonists are white.’

Colin Davis, another Twitter user, echoed the criticism and summed it all up by writing: ‘The African American actress and actor that they are complaining about actually have a great story arc and the main villains in the series is a white teenager, white plant lover, and a white old pilgrim dude.

‘What is wrong with people, not everything is about race!’