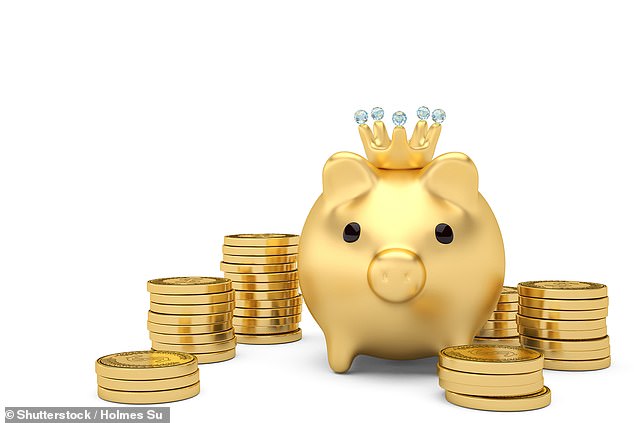 Savers can open an account with just £1 and are free to deposit up to a maximum of £250,000 – although as with all savings accounts, only up to £85,000 will be protected by the Financial Services Compensation scheme.

There is also a catch. Savers can only take money out of the account up to six times a year without having to pay a charge.

From the seventh withdrawal onwards, savers will receive a charge equal to 50 days’ interest based on the amount being withdrawn.

If they keep within the limit, someone stashing £10,000 in this account could expect to earn £285 in interest after one year.

Although this is a long way short of the current rate of inflation at 11.1 per cent, it’s a much higher return than what most people will be earning from their easy-access savings at the moment.

There is a total of £428 billion held in easy-access savings accounts paying 0.5 per cent of interest or less, according Paragon’s Bank’s report on the latest Caci data.

Caci produces an analysis of deposits with the main banks, using data from more than 30 providers based on individual adult cash savings.

There is a total of £1.003 trillion of deposits with these providers, so that £428billion figure suggests that not far off of 40 per cent of savers are allowing their cash to idly sit in low-paying accounts.

A spokesperson for The Savings Guru said: ‘This is a big move from Coventry Building Society this morning.

‘It’s actually a decent account and a six withdrawals limit isn’t a massive problem as a restriction for most savers.’

As the UK’s second largest building society, Coventry’s size and status will be an attraction for some savers.

Savers looking for an easy-access account to use as an emergency fund for one-off unexpected events may well see the appeal of this account.

However, for savers who regularly need to dip into their funds, the limited access element may mean this is not the account for them.

Those looking for an easy-access deal without restrictions might be better off considering Al Rayan Bank’s 2.81 per cent offering.

Al Rayan is a sharia-compliant bank, meaning that rather than listing interest rates, it details how much profit savers earn through an ‘expected profit’ rate – though the outcome for savers is the same.

Like every savings provider on our best buy tables, cash held with Al Rayan is protected up to £85,000 per individual.

Another possible option for savers looking for pure easy-access is the three app based banks, which This is Money tested earlier in the year.

Atom Bank and Tandem Bank both pay 2.55 per cent on easy-access, while Zopa Bank pays 2.4 per cent.

Will savings rates go up again?

The best easy-access savings rates have remained broadly the same. Aldermore briefly launched a 2.75 per cent easy-access deal and a 3 per cent double access deal before quickly closing applications for them both.

Meanwhile, fixed rate savings deals  have been falling back. The best one-year deal at the start of November paid 4.65 per cent. Now the best deal pays 4.35 per cent.

According to the Savings Guru, savers should expect fixed rates to dive further. However, easy-access deal should begin to tick up in expectation of a further base rate hike on the 15 December.

The Savings Guru spokesperson says: ‘I was expecting to see more moves next week, with some providers moving ahead of a predicted base rate rise.

‘We will definitely see further rises in easy access and I’m confident we will see 3 per cent either on the week ahead of the base rate announcement on December 15 or the week after.

‘At the same time, we are seeing fixed rates fall. The best one-year is down 0.25 per cent in the past four weeks and will fall further.

‘So easy access rates are likely to look even more attractive as they rise and fixed rates ease back.’