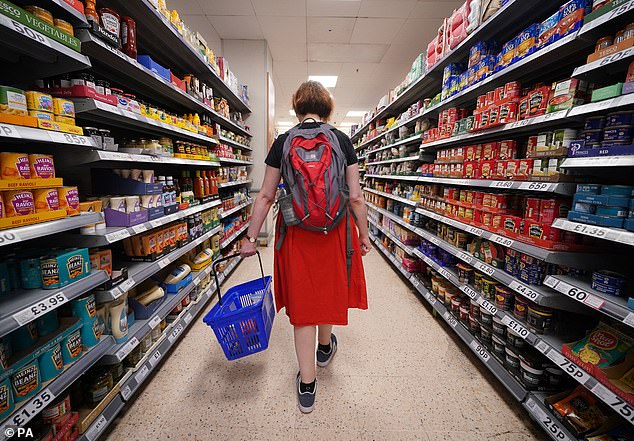 A tale of two cost of living crises: Low earners buy less while high earners keep spending but saving – and one in 20 are borrowing to maintain their lifestyle

Britons on lower incomes are cutting back on spending to make ends meet, but better-off households are ignoring rising prices and using savings to maintain their lifestyle, new figures show.

The Bank of England found that, faced with the choice of spending more or cutting back, around half of the richest two-fifths of have continued to buy the same amount of things they’ve always bought – or more – despite price rises.

They have made this possible by putting less money aside in savings, the Bank said.

In contrast, almost half of the poorest fifth of people in the UK have cut back on purchases so that they spend the same or less than before, with a quarter having cut back only on some purchases.

To buy of not to buy? Better-off households who have decided to keep buying what they always have generally funded this extra cost by saving less

The survey of 6,000 people conducted in September found that, overall, 70 per cent said that the price of things they normally buy had gone up in price.

But households are responding in different ways to rampant inflation, which at 11.1 per cent is the highest it has been in 41 years, according to official figures.

Food prices have seen particularly sharp rises, with UK food inflation hitting 12.4 per cent in October, a new record, according to the British Retail Consortium.

Lower earners have mostly tried to limit the impact of rising prices by cutting back on how much they buy or switching towards cheaper substitutes, according to the Bank.

‘Meanwhile, higher-income households have continued to consume the same goods or increased their purchases and have therefore spent more overall,’ it added.

These better-off households who have spent more money have generally funded this extra cost by saving less.

Rainy day fund: A quarter of people dipped into savings to hold onto their lifestyle

More than half of them told the Bank of England they had put less cash aside, while a quarter have been spending their savings.

About one in 12 households said that a pay rise had helped them to shoulder rising costs, but one in 20 said they were borrowing to maintain their lifestyle.

‘Overall, although the data suggests that savings have enabled many households – particularly those with higher incomes – reduce the impact of higher costs on their expenditure, the overall decline in households’ real incomes does appear to be weighing on aggregate consumption,’ the Bank said.

Making ends meet: Almost half of the poorest fifth of people in the UK have cut back on spending completely due to the rising cost of living

The extent to which households cut back on spending will be an important determinant of how much the UK economy slows down.

The findings reflect separate research by Hargreaves Lansdown, which revealed that higher rate taxpayers were less than half as likely as basic rate taxpayers to have cut back on non-essentials (15 per cent compared to 39 per cent).

‘It means they’re less likely to be suffering the short-term agony of sacrificing spending.

‘However, as a result, they’re cutting back on savings, eating into existing funds, and building up debts, so they’re set for more chronic pain over the long term.’

Separate data has shown that Britons are increasingly dipping into their overdraft and using buy now, pay later schemes in order to cope with the rising cost of living.