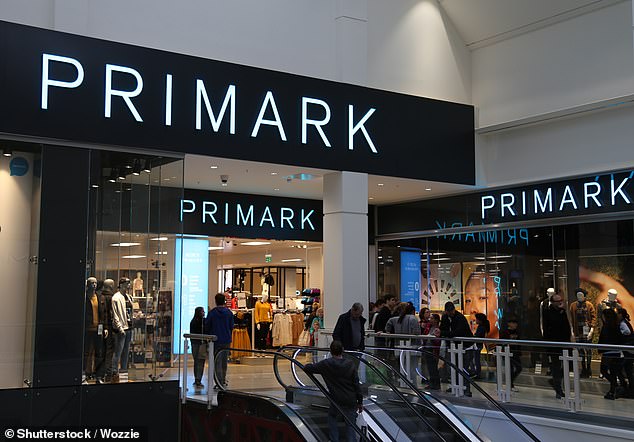 Primark owner AB Foods topped London’s premier index yesterday after analysts said it was best placed to deal with the ‘perfect storm’ ahead for the retail sector.

Economic pressures: Primark owner AB Foods topped London’s premier index after analysts said it was best placed to deal with the ‘perfect storm’ ahead for the retail sector

But Morgan Stanley also warned that hard-pressed consumers will see their savings fade next year.

Meanwhile, Goldman Sachs raised its rating on AB Foods to ‘neutral’ from ‘sell’ and hiked the target price to 1900p from 1460p.

Such coverage marked a sharp change in fortune since September, when shares in AB Foods hit a ten-year low after it warned that rising costs and weaker demand would hit profits.

On the wider market, shares in London ended the week with something of a whimper.

There were also swings on the currency markets. The US dollar rallied against currencies around the world as upbeat jobs figures piled pressure on the country’s powerful central bank to keep raising interest rates.

Having languished for much of the morning, the dollar bounced back after official statistics showed employment in the US rose by 263,000 last month. That was far stronger than the 200,000 increase expected by economists and will add to the pressure on the US Federal Reserve to raise interest rates further as it battles sky-high inflation.

Higher interest rates tend to boost a currency, and the dollar strengthened against the pound, with sterling dipping as low as $1.2136, having been as high as $1.2298 earlier in the day.

The turbulence continued, however, with the pound later clawing back those losses. Sterling remains well above recent lows, having tumbled towards $1.03 in the wake of Kwasi Kwarteng’s mini-Budget in September.

Having found favour with the market following its update on Thursday, AJ Bell (up by 8.3 per cent, or 30p, to 390p) ended the week on a high after Jefferies raised the investment platform’s rating to ‘buy’ from ‘hold’ and lifted the target price to 450p from 290p.

Ocado inched up 0.8 per cent, or 5.6p, to 670.4p after JP Morgan raised the online grocer’s target price to 550p from 500p. Over at Premier Miton Group, business looked to be improving.

The fund manager saw its assets under management (AuM) fall 24 per cent to £10.6billion in the year to September. Premier Miton also suffered net outflows of £1.1billion in the period, having reported an £830m inflow a year earlier.

But the group said its AuM has since recovered as clients put cash back into its funds during October and November. Shares soared 15.3 per cent, or 14p, to 105.5p.

Finally, a biotechnology company where Neil Woodford’s Equity Income fund once held a stake took a hit after revealing that it would not be able to complete a fundraising. Reneuron Group said that this was down to ‘unfavourable conditions in smallcap equity markets’.