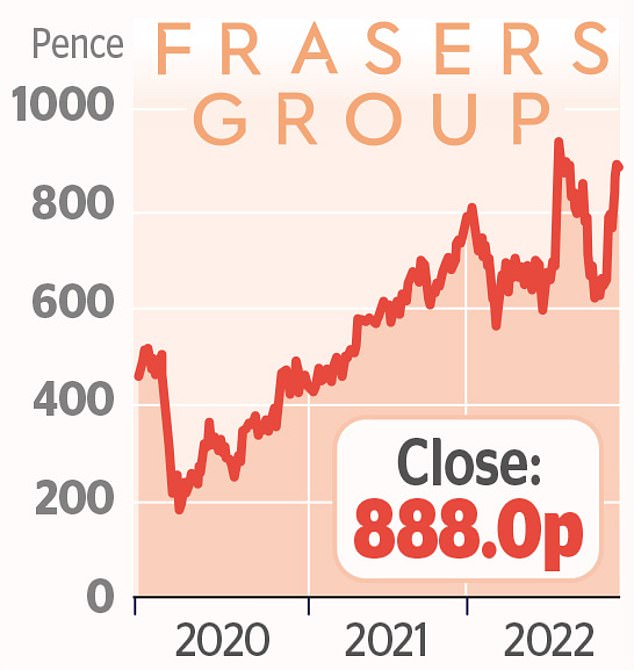 SHARE OF THE WEEK: Frasers set to offer investors a first glimpse of how it is faring since tracksuit tycoon Mike Ashley stepped down in October

Mike Ashley’s Frasers Group will offer investors a first glimpse of how it is faring since the tracksuit tycoon stepped down in October.

Ashley left his son-in-law Michael Murray in charge with a mandate to revamp the retail empire he set up as a single sports shop in Maidenhead in 1982.

Murray, who married Ashley’s eldest daughter Anna in May, is trying to replace cluttered stores with more upmarket outlets featuring the priciest new releases from Nike, Adidas and Under Armour.

In an interview last month, Murray said: ‘When I became CEO there was only one way, the new way.’

Frasers’ half-year results, out on Thursday, will shine a light on how successful Murray’s ‘elevation strategy’ has been so far.

Analysts will also be looking out for other strategic changes from Murray, who has insisted his father-in-law is not pulling the strings.

‘As part of this push, it acquired Missguided and I Saw It First, and it will be interesting to see how well the integrations are going.’

And shareholders will be hoping for a pre-Christmas boost amid fears that the rising cost of living could see shoppers cut spending.

Shares have proved resilient so far and are up 13 per cent since the start of the year, and a strong outlook for Christmas would give investors a boost.