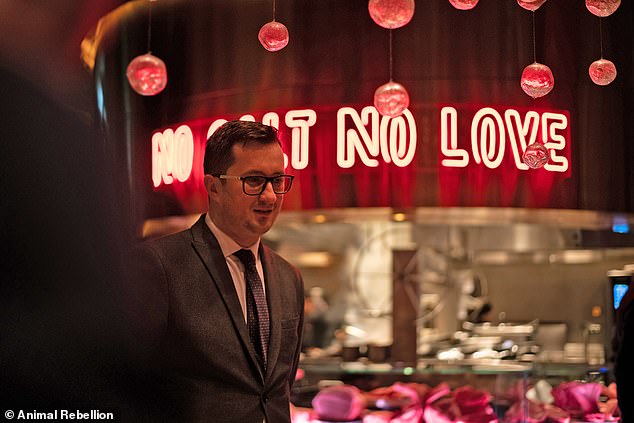 By James Reynolds For Mailonline

Salt Bae, the social media influencer and chef who rose to fame in 2017, has hosted the likes of David Beckham, Snoop Dogg and Leonardo DiCaprio at his ‘ultra-premium’ restaurants.

In November, Salt Bae was slammed on social media after bragging about a customer’s £140,584 bill in Abu Dhabi.

Protesters claim staff at Salt Bae’s upmarket steak restaurant had physically removed demonstrators from the venue ‘tougher than police would do it’.

Student Ben Thomas, 20, said: ‘We’re in this restaurant to show the inequality in lifestyle during this cost-of-living crisis with people out in this fine dining establishment while others can’t heat their homes.

‘We’re a group of non-violent protesters also campaigning for a plant-based food system.

‘We just sat there, wait staff were quite civil, but the members of the public – two of them got quite aggressive at one point.

‘The woman kept giving me really dirty looks just for being there. The customers clapped as we were picked up and taken outside.’

Orin Cooley-Greene, 21, said: ‘It was tougher than police would do it.’

Mr Thomas also said: ‘Restaurants like these are symbolic of a broken system.

‘Whilst 2 million people are relying on food banks in the UK right now, influencer chefs are selling gold-plated steaks for more than one thousand pounds.

‘Steaks, and other red meats, that we know carry the highest environmental impacts.’

An hour after the occupation of the London restaurant, 16 Animal Rebellion supporters entered ‘Mana’, a Michelin Star Restaurant in Manchester’s Ancoats district.

The restaurant boasts a set-menu starting at £195 per person and refuses to cater for vegans.

The group claims these actions will continue until the government takes meaningful action on the climate and ecological emergencies.

Animal Rebellion claims meat served in Salt Bae’s restaurants is among the most carbon intensive foods to produce.

A study last year found meat alone accounts for nearly 60% of all greenhouse gases from food production, with beef and lamb some of the worst polluters.

Salt Bae was slammed online after sharing a £140,584 bill from a customer in Abu Dhabi

Salt Bae’s restaurants are hotspots for the rich and famous, racking up huge bills