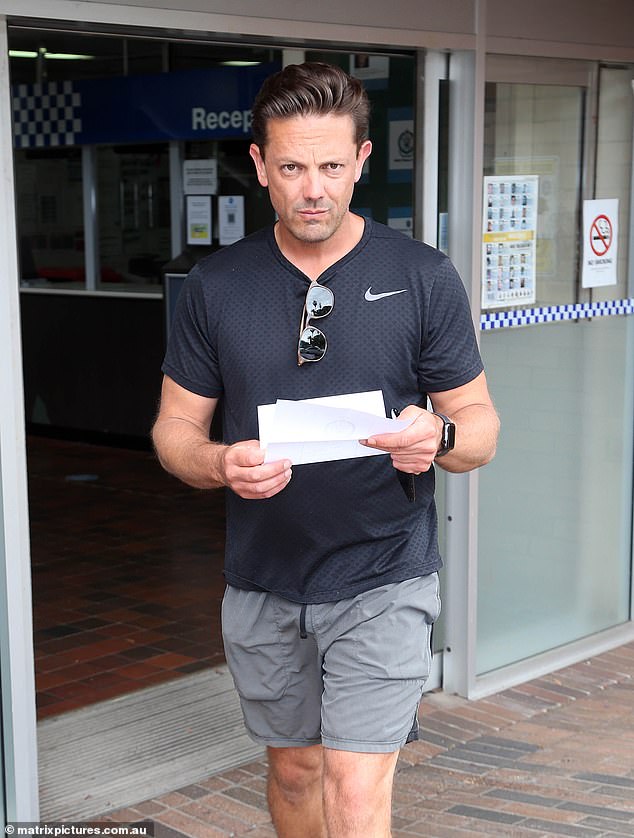 A man charged with stealing a taxi while drunk after a viral police appeal has been unmasked as a high-flying real estate executive and ‘family man’ who lives in a multi-million dollar eastern Sydney home.

Brett Henson, 42, is accused of threatening a 54-year-old cab driver in the city’s CBD at about 9pm on Friday, November 4, before taking off with his car.

The taxi was then allegedly dumped about 5km east in Woollahra, where it was later found with ‘significant damage’.

Henson was arrested and charged six days later after CCTV footage of the alleged theft was shared across police social media channels.

Henson, who allegedly stole a taxi under the influence of alcohol, held a piece of paper up to conceal his face as he left the police station

Henson was this week spotted walking to Waverley Police Station for his weekly report in – a requirement of his bail conditions.

Henson – who was dressed casually in shorts, a Nike t-shirt and sneakers – appeared downcast and refused to answer questions over the alleged offences.

He was accompanied by a suited man clutching a brief case who would not confirm whether or not he was the executive’s lawyer.

Speaking on Henson’s behalf, the suited man said he would not be commenting on the charges.

Earlier that morning, Henson was seen chatting to a pet day-care provider outside his lavish three-storey home as she arrived to pick up his dog.

The animal wellness business charges $80-a-day for dog sitting or up to $150 per session for other services.

Henson refused to answer questions about the alleged taxi theft

After she left, Henson strolled out of his front gate and headed to the police station, stopping occasionally to smoke cigarettes, sip on a takeaway coffee, and take calls.

Under NSW Law, drivers’ licenses are suspended immediately if they are allegedly caught operating a vehicle under the influence of alcohol.

A neighbour, who wished to remain anonymous, said they were ‘shocked’ to learn about the allegations levelled at the businessman.

‘He’s got three young kids and a beautiful wife. I can’t believe it.’

Property records reveal Henson snatched up a 99-year-old single-storey Bronte property for $2,425,000 in November 2019, before knocking it down to rebuild.

Henson is the owner of a multimillion dollar property in Sydney’s eastern suburbs. A 1920s build bought by Henson in 2019 for $2.4M was knocked down and replaced with the three-storey white brick home pictured above

A development permit was approved in August the following year, with a build value of $750,200 over 109 square metres.

Prior to Mirvac, it is understood Henson was already accomplished within the real estate sector – having previously worked as an executive at Westfield and Scentre Group as well as holding the title of regional property manager for Woolworths.

It remains unclear whether Henson remains employed at Mirvac after being charged with take and drive conveyance without consent of owner, drive recklessly or furiously or speed and manner dangerous-1st offence, and drive vehicle under influence of alcohol.

A Mirvac spokesperson said: ‘We are unable to comment on the specifics of this issue.’

Henson was granted bail shortly after his arrest on November 10. He is due to appear at Downing Centre Local Court on Wednesday, 7 December.